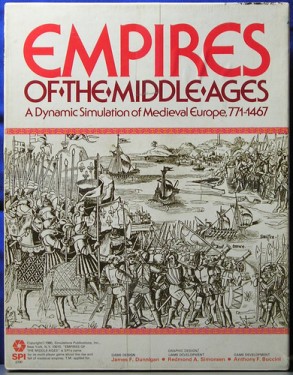 I think this one should be seen more as a simulation than as a normal game. If you play the campaign, this one is huge! It will take 60+ hours to play. There´s not a lot of action going on, the game shows more a slow process of the developement of different (partly fictional) empires in Europe.  The campaign starts as a two player game: the Frankish Empire under the reign of Charlemaigne and the Byzantine Empire. When the son of Charlemagne dies, the Empire is split in three parts and we have a four player game. Two more players may also join at that point by choosing three connected, uncontrolled regions in Europe as their starting Empire. Mostly, players will try to rule their provinces by improving their social state, getting rid of unrest wich might come from taxing and deal with random events. Wars are expensive, will often wreck the involved areas and may drag on for many years. Therefore you need a healthy economy and a long breath. Coalitions with other players will definitely help a lot, may it just be a sponsor who shares the cost. Attacks are completely abstract and like all other possible actions, their chance is determined mainly by the leader ability and the money you´re willing to invest. Theoretically a small kingdom could withstand a massive empire if other players are willing to fund that war. This might be even realistic, considering that many fighters of the time were merceneries, willing to fight for whomever pays them. Overall, I feel that wars will be fought over single provinces and not to conquer entire kingdoms.

Other possible actions are building fortifications, pillaging enemy provinces or achieving diplomatic ties wich can be converted into claims. These will add to the points in the end.

The game comes with a lot of details (most of them optional) like raiders, magnates, crusades and schims. It can become pretty fiddly and there are times when it drags quite a bit. Overall: This is THE monster game of the middle ages and like most monster games, it comes with a lot of flaws and fiddliness and balance problems, but it´s the experience that you play that for. 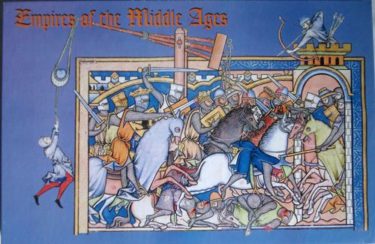 This is the second edition published by Decision Games. It changes the map from a point to point system to areas, wich works perfectly and doesn´t change the gameplay. It also adds a ton of new event cards, most of them come into the deck only for a specific time period. Therefore the events feel less generic and this adds a lot of historical flavour. Also famous kings with improved stats can enter the game this way. In addition to that, buildings like cathedrals or universities can now be constructed as well as fleets and armies. All this adds also to the fiddliness and only partly improves the experience. I have a ton of houserules to incorporate these in a more playable way wich you can see in my playthrough.