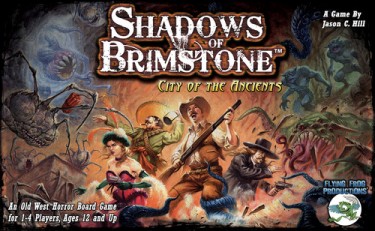 Many prospectors have been drawn to the town of Brimstone because of the Dark Stone that can be found there. Some priceless mineral with powerful mystical properties. But when the people dug to deep, a horrific explosion shook the underground mines. Gates to other world opened and terrible creatures escaped, bringing fear and death to the region of Brimstone. Are you brave enough to return there and make your luck no matter what?

This fantastic game system is a thematic mixture of wild west and the Cthulhu mythos. It´s a cooperative dungeoncrawl where players explore a mine, try to find gold, Dark Stone, items and artifacts. They´ll face threats in form of all kinds of monsters and events. Later in the game, players will find gates to other worlds, each with their own inhabitants, events and artifacts.

A real innovative aspect of the game is that players can carry over their character from one adventure to the other. The character developement is pretty sophisticated for board game standards. Between the adventures, characters will travel to town where they can buy equipment, heal and will also face some adventures. This is handled by tables and dice rolling.

The city of the ancients is a core box that provides you with everything you need to play. Apart from the mines it introduces the Targa Plateau as Other World: an ancient, deserted city covered with snow and ice where some weird alien technology can be found.

The components vary a little in quality: Cards and map tiles are very good, the minis though could be better. For me, the fact that I had to assemble them myself was pretty frustrating. The art of the cards is okay, the map tiles are spectacular though! They just blow you away!

It´s important to keep in mind that Flying Frog just started a new product line with this set. It´s amazingly promising. With what we get now, it´s already in my top three! But if you check out what´s all planned, it´s simply mindblowing: Much more heroes, four or five more Other Worlds, all with their own enemies and events and items. A bigger town. And that´s just the Kickstarter stuff…this can go a long way!

Here is a playthrough of a small campaign. 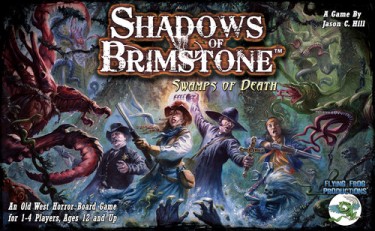 This is the second core set of Shadows of Brimstone. You might also call it the first one, because it was released simultaniously with City of the Ancients ( I just follow the alphabetical order here). It´s also a stand alone set. Compared to City of the Ancients, you´ll get new heroes and a new Other World: The Swamps of Jargono. I haven´t explored that one really, so I cannot say too much about it, except that these seem to be dark, dirty and dangerous swamps!

For the mines you also get some special new map tiles, many of the event and item cards are new and also new monsters.

It´s easy to mix both sets together. Sadly the basic missions are exactly the same as in the other box, and many advanced missions are also very similiar.