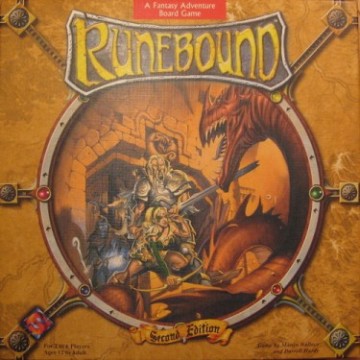 Fear spreads these days in the prospering cities of Terrinoth. Rumors say, that the terrible necromancer Vorakesh is sending his minions to find the three Dragon Runes. Posessing them would allow him to bring Margath, the King of the Dragons, back to live and with such a powerful ally he will bring unknown evil into the land.

Luckily there´s you…a naive young hero, completely overconfident, with no weapons or allies but a lot of ambitions. People of Terranoth, I suggest you better start praying….

Runebound is a high fantasy adventure game from one to six players, but in my opinion it´s best solo. It comes with tons of expansions, many of them giving you different adventures, that set the frame for the game. In the base game, it´s the “Rise of the Dragon King”.

There are maybe 60 different types of heroes to choose from, each with their own abilities and miniature. In basic, the concept is simple and in most adventures the same: At the beginning, you´re a real twirp. All over the map, you´ll find four different types of challenges, from green (easy) to red (boss). So you´ll start fighting and hopefully killing some green monsters, wich will give you some experience points and some money as reward. This will allow you to purchase equipment in the cities and after a while you will level up, wich will improve your fighting values. After a while, you´ll get more money, better weapons, maybe some allies and more experience, so your character will improve more and more. You´ll face tougher monsters for a richer reward. If you feel up to it, it comes to the final showdown when you attack a red challenge (in some adventures, it might be a little different).

In the solo variant, to accomplish all this, you have only limited time, measured by a thread track. Still, it´s not a wild race, usually there´s enough time to explore the world and enjoy your adventures. It just prevents you from playing it too save, so that it gets boring.

The combat system is great. I don´t wanna explain it here in detail, but it´s simple, fast and clever!

What makes this game so fantasic is the sheer size of the world: With all the expansions, there are overall six boards with all kinds of climate zones, there are hundreds of monsters as well as hundreds of objekts and allies. Everytime I play this, something new shows up. The replayability is just amazing!

The quality of the art varies a lot: while items and allies look great, many heroes and monsters suck. That gets a little better with the later expansions, but especially in the base game, they look really bad.

Still, Runebound is, especially for solo play, one of the best games in the genre, if you own some expansions, because this gives you the feeling to explore this immense world of fantasy and magic. 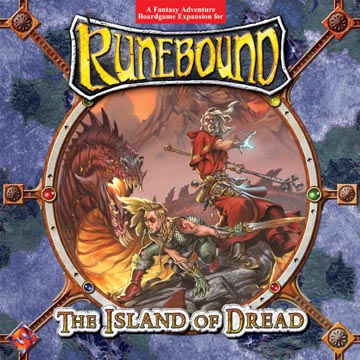 Legends tell of the horrible creature Assif Shib Sa, wich slumbers on the Island of Dread. If it should awake, terror will overcome the country. The goal in The Island of Dread for the players is to find the Island, fight the minions of Assif Shib Sa and then kill the horror himself. To find the Island, the players need to find a matching set of map counters, wich they gain by defeating challenges. These map tiles also allow them to find powerful treasures, wich they will probably need to survive on the Island.

It´s important to note, that, like with all other new adventures, you don´t mix the new challenges with the base game, but you replace them. You shuffle the new market cards into the base deck though.

This expansion also comes with an overlay board: five islands in moderate climate. For movement, you can now hire a captain and then travel the sea, wich is pretty dangerous because of the creatures lurking in the deep. In addition, the expansion offers eight new heroes. Overall a very straight forward expansion, that captures the seafaring theme really well, therefore it´s probably my favoite expansion. I do a playthrough here. 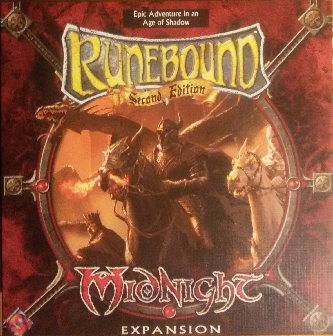 The dark god Izrador is ruling the country with the help of the four powerful Night Kings. The only way to banish them is to find the three Magic Mirrors wich are hidden in their dark strongholds.

This expansion is quite different to the others: It´s now a semi cooperative adventure. One player controls a Night King and his minions, while the others control the heroes. Their goal is to enter the strongholds and find the well protected mirrors. This semi coop concept was not well received though and FFG decided not to continue this approach, wich is probably also the reason why this expansion is extremely rare. It´s a good expansion though: you can easily ignore these Night King rules and play it the classic way. It comes with a new challenge deck and a new market deck wich is meant to replace the old one. I don´t do that but mix it with the other market cards. This market deck alone makes the expansion interesting: it contains of 50 new items. In addition, you´ll gain eight new heroes and an overlay board, showing a temperate landscape by night. The playthrough is here. 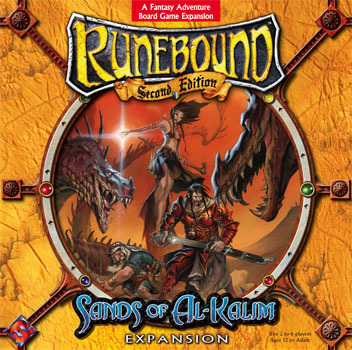 In this expansion, the world needs not to be saved! The expansion is settled in a Tales of the Arabian Night like environment, and players want to become legends themselves. To accomplish this, they must fulfill four legendary quests. To get a quest, players must face challenges of the different coulours. The expansion comes with an overlay board of a desert landscape. Movement in the desert is rough though: you can decide travelling by night when most creatures are more dangerous or by day, wich is much more exhausting. There´s also a sandstorm moving over the map as well as cities that appear and disappear between the dunes. A really good expansion with new allies specifically for the arabian theme and new heroes. 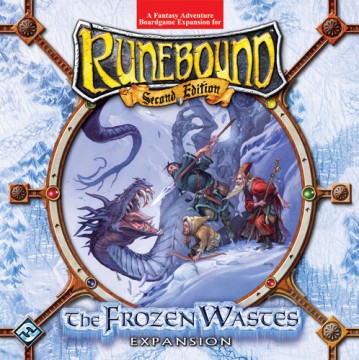 I don´t even wanna start to tell the ridiculous background story of this one! The goal is to find an ice princess or a princess in an ice tank or whatever… Anyway, level up by slaying monsters and that will allow you to collect the tiles that show you the way to victory. The story is settled in an arctic landscape, shown on a new overlay board. The changing weather conditions make traveling a dangerous and exhausting affair: You can find valuable items buried under the snow but staying in the wilderness too long will lead to frostbite. 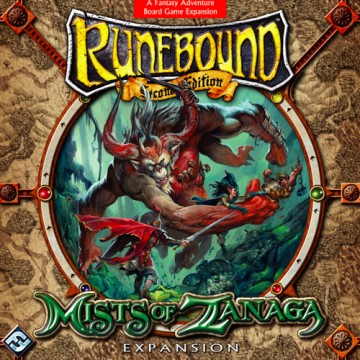 I just played this expansion once some years ago and I don´t remember much. It´s settled in a jungle environmet with quite some rule changes. There are now roaming creatures, wich make your live harder. In addition, there are rituals for the evil gods of the jungle. Every time you draw a challenge card, you also draw a marker. The combination of markers drawn show, wich Great God will be your enemy that you have to fight in the end. From a certain point, this god will start affecting the game in a negative way for the player, so things become harder and harder.

I remember that I didn´t enjoy the experience that much: I felt under heavy preassure, trying to race through the levels, before the god becomes too strong. The relaxed and still challenging spirit of Runebound wasn´t there for me in this expansion. But I´m sure you can fix this eaysily with some house rules.

The Adventure Decks contain of challenge cards. Usually the green/yellow/blue ones are shuffled into a big adventure, while the red ones completely replace the others. Often there are new rules too. 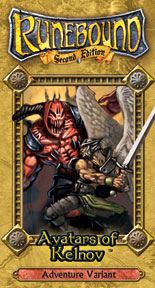 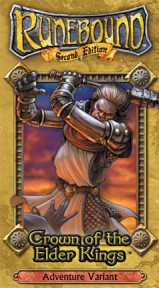 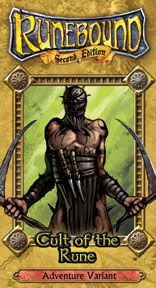 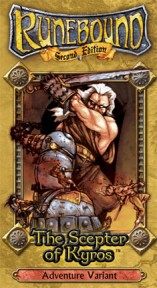 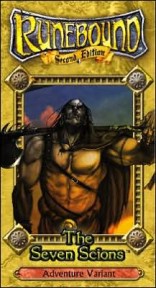 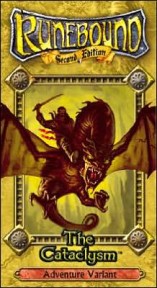 The Challenge Decks simply add new Challenge cards to the deck. You mix them with the adventures. 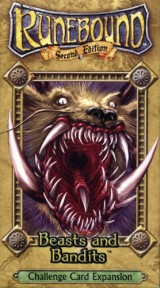 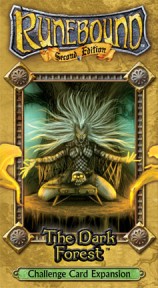 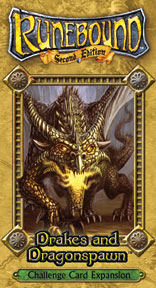 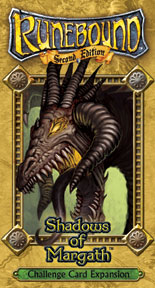 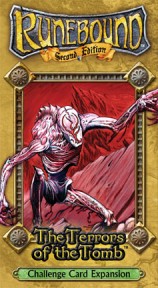 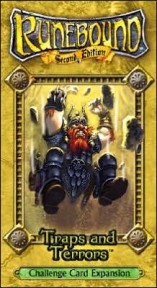 The Item decks give you more items and allies. 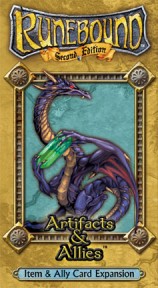 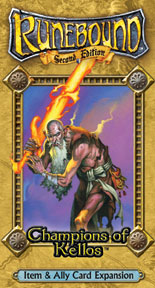 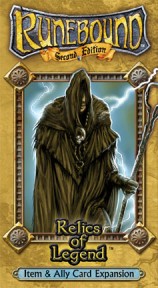 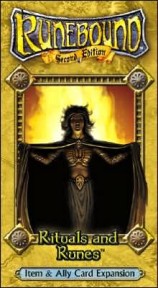 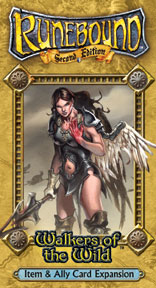 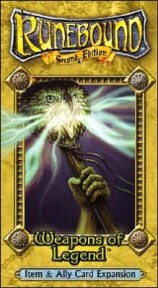 And a few more characters. 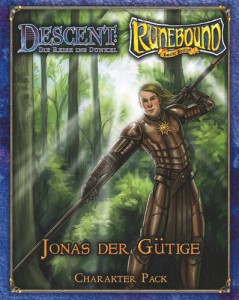 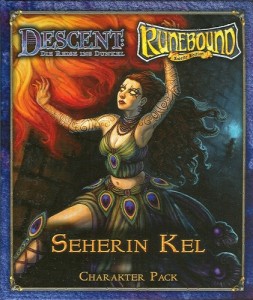 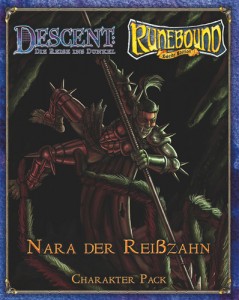 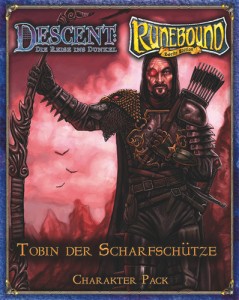