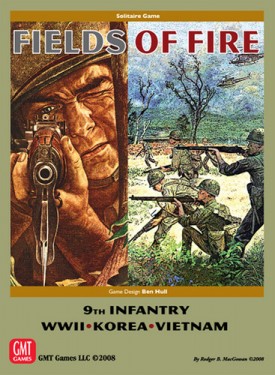 This is one of the most complicated and challenging games I´ve ever played! It´s a pure solo game and the player follows the 9th Infantry on three different theatres: Normandy, Korea and Vietnam.

It comes with a unique mechanic: It´s a card game with tons of chits. The board is randomly generated with cards that show different terrain types. Each of the three campaigns consists of seven missions. Your steps gain experience through the campaign and might be promoted wich makes them more efficient. Of course you can also play the missions on it´s own.

Apart from the terrain cards, the game includes command cards. These contain a lot of information: How many command points you have, if you hit or miss, if actions like spotting or rallying ae successfull, or they are simply used to determine a random number. The A.I. is completely controlled by these random numbers combined with tables. What type of enemy you face, how they react, where they are placed….

Another key mechanic is the concept of the chain of command: You have a limited number of command points. Now you, as Company HQ, could give orders to single steps that they will follow, but that´s not very efficient. You may better activate the Platoon HQs. They will then draw new command cards, and now each of them can give orders to steps in their platoons.

Another interesting aspect is communication: You need field phones or radios to communicate, otherwise you cannot give any orders. There is still the possibility that units act on their own initiative, but again, this is not very effective.

The rules of the game are a mess….even the downloadable version, wich should be more accessable, is so hard to digest. The main problem is that the game tries (and manages) to cover nearly every aspect of an armed conflict on this scale: terrain (with more levels), all kinds of units, vehicles, communication, pyrotechnics, weather, night missions, helicopters, air strikes, artillery, mortar, snipers, …..it feels very realistic, but it comes with such a high learning curve.

A problem is that, though you think that you have lots of options, in the end you mostly follow the same pattern: You send ahead one step to scout, hoping not to walk into a mine field or to provoke a sniper…then if the area is secured, you let the others follow. Sometimes you might try some special maneuvres, but it feels like the games plays itself very often. I have played it limited times though, so maybe things change if I try other mission types and more vehicles…

Still, this is a fascinating, because unique, game and I play it on a regular basis…simply because I don´t wanna forget the rules and start all over again…