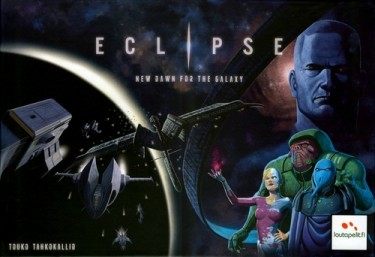 Eclipse is a fantastic 4x game: Different human factions and alien races are trying to explore the galaxy, build up their economy, do technologically research, construct their own individual ships and fight for survival in the vastness of space. I usually have a problem with these kind of games (i.e. Twilight Imperium or Space Empires4 x), simply because you have to play mostly extremly aggressive, try to expand as fast as possible, improve your fleet as fast as you can and, after  a stupid arms race, we´ll see some big fight! I find it hard to enjoy these games, because it sucks if you lose….especially in these kind of games. Usually you find a runaway effect in these games: Players build fleets to conquer systems. That allows them to gain more resources and therefore to build more and better fleets. Wich gives them more options and better odds to conquer more systems. You run out of options once you´ve fallen behind and you become more and more a spectator of what a few others do. All you can do is hoping that the big players don´t finish you off (or mybe that they do…I once played ten hours Twilight Imperium, waiting six hours, hoping to finally get killed).

There are some great ideas wich solve these problems in this game: first, it´s the duration. It´s limited to nine turns and five minutes per players turn is realistic. So, it´s still long, but it´s not ridiculous long. The exploration is well solved…you can only travel through wormholes and if you place the tiles in an appropriate way, you can avoid contact with other players for quite some time. There is still a lot to do, even if you don´t fight your opponents directly: you may explore, fight ancient alien ships that can provide you with rare technology, you can trade, colonize worlds and build monoliths…they also give you victory points.

To stop this mentioned runaway effect I hate so much, the game takes two approaches: First of all, there is a strict limitation of units. Overall, each player may have between ten to fifteen units available. In addition there´s a simple mechanic. Each player has a number of wooden pieces. The number of pieces on your player board determines in some way the number of your actions. Everytime you colonise a new system, you place one of these pieces on the map. So the bigger your empire, the less actions you have. That´s a fantastic idea! Thematically it makes also sense: Bigger empires are harder to control, there´s more bureaucracy and so on…

Maybe the game could have a little more theme, still, it doesn´t feel too abstract.

Components are are very good. The base game has the same models for all players….that changes with the ship pack. The map tiles look great! Overall my favorite 4x game. 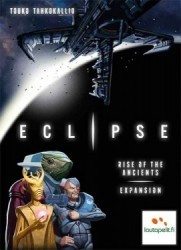 Haven´t played with the expansion yet, but it adds a lot of stuff: new races, technologies, map tiles. Also some new rules, like alliances, ancient homeworlds, Warp Portals and other things…. 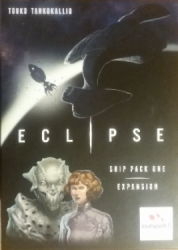 This expansion comes with different miniature types for the different races.