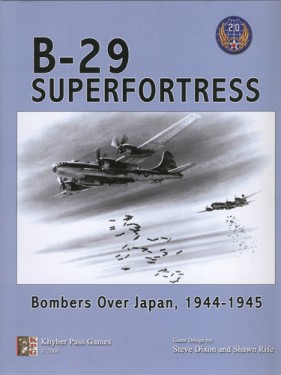 B – 29 Superfortess follows the idea of the old classic B – 17 Queen of the Skies. Players follow the destiny of a bomber crew in the second world war at the Pacific front.

Again, what you basically do is dice rolling. Still, there´s a difference to B – 17. While that was mostly about fighting off German interceptors, here this part is less important, because there were not too many attacks from fighters on the Japanese side (although still enough). Because the distances in the Pacific region were so vast, fuel was really an issue. Navigation, altitude, weather…these things are now much more important.

I haven´t played this yet, but it´s said to be more difficult than B – 17.