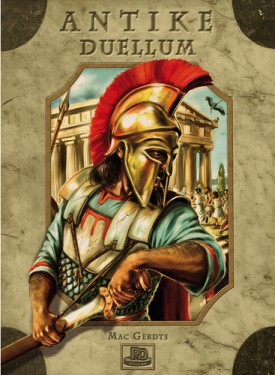 The game comes with two scenarios: The Punic wars and the Greek – Persian Wars.

It’s a game of the Rondel series by Marc Gerdts. The series is mostly known for the games Antike and Imperial. It’s most distinct feature is a rondel where players move their marker to determine their action of the turn. This mechanic leads to limited options each turn and some interesting decision making.

Possible actions are generating resources (per city), creating soldiers and galleys, arm them and bring them into play, building temples and walls for defense and additional resources,  researching new technologies, moving your units.

In addition to these actions you can found cities by paying resources and controlling areas.

The goal of the game is to bring cards of famous persons on your side. You’ll get them for specific achievements: A king for five cities, scholars for technologies, navigators for controlling seven sea areas, citizens for building three temples and generals for destroying a temple.

Combats are resolved similiar to good old Civilization: Pieces are simply removed simultaniously,  until one side is left in a space. To attack a city, you need a specific number of troops, depending on the defence capability of the city (defending units, temple, walls).

The first player who gets nine of these cards, wins the game. There are only limited numbers of each card, so you are basically forced follow not only a single strategy.

Antike Duellum has only a few pages of rules but comes with a lot of decision making.

It’s a real Euro, with a minimal luck factor. It captures the theme in a way that you’re feeling,  your handling some ancient conflict, in a euroish way, but it´s in no way specific. I mean, you simply flip the board, and you´re playing the Punic wars. You can get Hannibal as a general if you´re Persian!

So, for me, this is more a collector´s object, simply because it´s possibly the only  game that covers the Greek – Persian war. If there was something else a little less euroish, I´d probably tend to that.

Still, it´s a good two player Euro with very nice components, and I´m glad that it´s part of my collection.