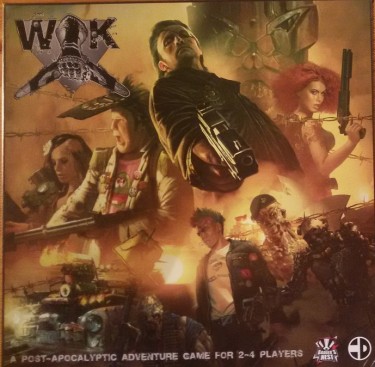 Waste Knights is a highly atmospheric game about crazy loners, travelling the waste in post-apocalyptic Australia, following tasks and risking their live for some useful parts and a little bit of fame.

It feels a lot like a Mad Max movie.

The game offers five different scenarios: One introductionary scenario,  where you simply have to fulfill missions. Another one comes with some tough boss enemy at the end. There’s also one with the focus on battles between players.

Finally we find one which takes even a semi cooperative approach.

The map is modular and contains of about 30 hexes. Most of them are placed randomly, which makes it different each game. There are five cities, which are relatively save: players can trade items, heal their wounds from fights, radiation or biohazards, refill the tanks of their vehicles or regain ammo. All this comes for a price though.

About ten other hexes are more dangerous locations. You can explore these and can usually choose between two or three special actions per hex, like free fuel at the Old Refinery or a glorious fight in the capital city of the mutants.

Speaking of mutants: the waste is full of dangerous creatures: mutants, out of control robots and weapon systems,  biker gangs and many more! Dangerous weather and bad roads make travel even harder.

An intersting mechanic is the Waster: the player opposite to the active player, who can often choose between different events that the latter has to face. He also plays the enemies in combat, wich reduces down time a lot.

Combat is a really clever mix between card playing and dice rolling. It requires quite some decision making and is highly thematic.

The game proceeds in a way that players fulfill missions and gain items and fame points as reward. When a certain amount of fame is reached, they can try the final challenge.

The art of the game is outstanding!  Actually one of the best I’ve seen in games at all!!

I do enjoy the game a lot, theme and atmosphere are great, still I have to complain a little: First of all, I need more stuff! More events, monsters, items, vehicles…after playing it once or twice, you´ve seen everything.  But the most important thing is a more climactic play! You meet the same monsters and events no matter how strong you are. So at the beginning they seem too strong, at the end too weak! This could be fixed with an addition like in Talisman: An extra area (board) for the advanced play. So if they expand this in the right way, this could become one of my favourite Amerithrash games!