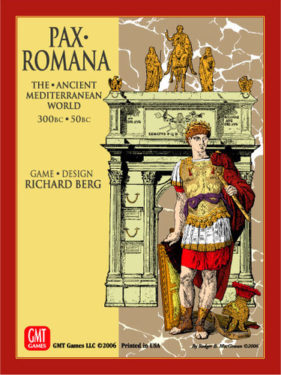 Pax Romana is a game for up to four players that covers 250 years of the history of the ancient mediterranean world, basically the time of the Roman republic. Rome, Greece, Carthage and the East are fighting over the ancient world. Players gain points for the control of provinces, but also for the improvement of economics and culture, wich is represented by city building.  It uses a chit pull system like many other Berg games. At the beginning of a turn, there´s an economic phase: players collect income from provinces and cities and hire units. Placement is done secretely by writing it on a piece of paper. New leaders enter the game, and maintainance will be paid. If your army becomes too big, your political stability might fall…the effect of this is not too critical though.

After the manpower phase, the action phase, the heart of the game, takes place. Each player has four activation chits. If their chits are drawn, players start the action phase by drawing a card, wich bring sometimes immediate events like slave revolts or barbarian invasions. Sometimes players hold those cards in their hand, until they wanna use it to their advantage.  After that, they activate their armies and build towns or improve them to cities. Combat is handled by die rolls. The attacker and the defender each roll one six sided die. They take into account the army strength, leader values, cavalery superiority, terrain modifiers and defense modifiers for cities. The superior player is allowed to modify the die rolls. Doing more damage means to accept higher losses.

After the action phase, attrition is handled and finally victory points are gained.

Pax Romana is a really good game. There´s a lot of chrome and luck…the events have a big impact and can change the game a lot. They also add a lot of atmosphere. However, it is also a very long game, especially if you play the full campaign, probably about 25 to 30 hours playing time. For that much effort, I would love to see a little less focus on the military aspect, but more on politics, technology and culture. You can see my playthrough here.