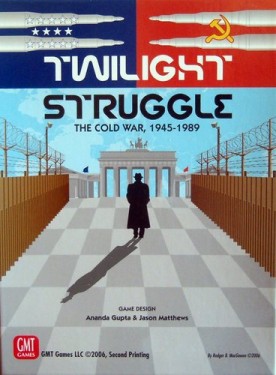 This two player game, wich covers the cold war from 1945 to 1989 is probably the most successful CDG until today. It’s number one in the ranking on BGG.

It uses the typical game mechanic as many other CDG’s: cards come with command points,  wich enable you to do different actions, and with events.  Players have to decide,  wich effect to use when they play a card. If they play a card for its command points,  wich shows an event that would help the opponent,  the event is triggered in addition to the action. With every card you play, you’ll have to face a decision.

If no specific victory conditions are met, the game continues for nine turns.  Each turn, players play alternating six or seven cards.

Some cards, scoring cards, trigger a scoring action,  when players get victory points for domination in specific regions,  i.e. Europe or the Middle East. Of course, only one of the players holds this card in his hand,  and can therefore wait for the right moment to play it, wich might lead to a lot of suspicion and bluffing.

With the ongoing game,  new cards ( mid- and late war cards) will be shuffled into the deck,  while some events are removed after played.

A good way to get rid of cards that would help your opponent is the space race. Once per turn you may discard a card in the space race, without triggering the event. Depending on a good die roll, you then may advance in the race and gain victory points and other benefits.

Another feature is the DEFCON track. The more aggressive actions players take, the lower it will go. This restricts your options significantly,  if you wanna avoid nuclear war, wich would let you lose the game immediately.

Twilight Struggle is a good two player game.  It’s fairly simple,  but really clever. It looks great,  components are of high quality and it doesn’t take forever…maybe two to three hours. Sometimes it might feel a little too abstract though. Because there are no units on the board but only influence markers, it feels often like a numerical puzzle…especially if you play with someone who doesn’t care about card titles. (He simply plays the card, telling you only the game effect).