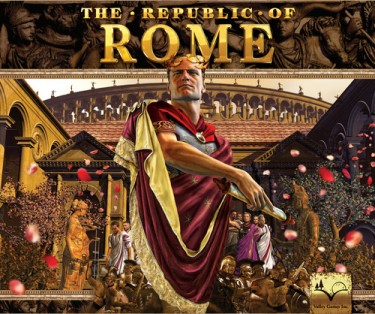 This is an old classic,   first published by Avalon Hill,  but I own the ….. edition. It’s a semi cooperative game. Players represent factions of powerful senatorial families during the time of the Roman Republic. Their goal is to work together to allow Rome to withstand the threads from its enemies,  but also try to become the most powerful faction in the Senate and maybe even lead a rebellion against the Republic and become emperor  themselves eventually.

It’s basically a card game…The beautiful board only helps you to organise the table and shows some charts.

There are two main phases during a turn: the Forum phase and the Senate phase. During the Forum phase,  each player rolls two dice. On a seven, there’ll be a random event,  otherwise the player will draw a card. These might either be cards that will allow him to do special actions during the Senate phase (like blackmailing or assassinations) or it will be public cards, that go in the middle of the table. These can be new senators,  that players might attempt to win for their faction by doing a bribe. Often the cards bring wars into play though, that Rome has to deal with.  If there are ever four active wars in play all players lose.  During the Senate phase, lots of negotiations and deals will be made. The state offices like consul or censor will be given to specific senators by vote. They grant influence and special duties or options. The consul will lead the legions into war,  the censor might start prosecutions. The senate also decides how many fleets and legions will fight each war, who’ll gain gouvernerships and other things. Decisions are made by voting,  where each player had votes depending on the influence of their senators. During the game,  you’ll try to increase your power and gang up with other players to prevent the leading factions from winning.  If during the game nobody has accumulated enough power to become consul for life or to try a rebellion and if at the end of the deck Rome survives, the player with the most influence wins.

Republic of Rome is a pretty complex game, the rules are horrible written and from what I know, many of the decisions the senators deal with in this game, we’re historically not done in the senate but in other institutions.

Still, with the right people,  it’s a fascinating game with a pretty unique approach.