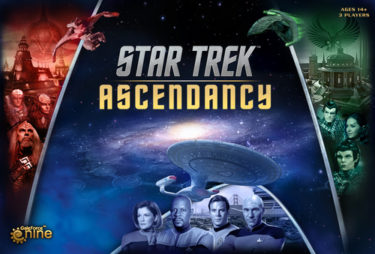 Star Trek – Ascendancy is a 4x game in the Star trek universe. The base game can only be played with exactly three players. for a 4x game, it´s relatively short: It can be played in about three hours. Let´s take a short look at the 4x:

Exploration: The game takes an interesting path here: You don´t explore the map by adding hexes as in many other games, but you build a point to point map with the course of the game. Although this is really an interesting and innovative system, I don´t think it´s a good choice for a Sci-Fi theme. You usually use point to point movement to reflect terrain limitations, wich should not exist in open space. The event cards that are drawn during exploration add some nice Star Trek flavour to the game, sadly once the map is explored, no more events show up. A little more variety in the event resolution would also be most welcome.

Expansion: As long as you´ve discovered empty planets, you simply sacrifice a vassel to colonize them. If the planet you want is already habitatet (either by a rival player or a minor culture) you may either invade it or try to capture it by cultural superiority. Both is done by dice rolling.

Exploitation: There are three different resources in the game: Production, Science and Culture. They are generated in specific nodes that you may construct on the planets you captured. Planets only offer a limited number of slots for these nodes, and the type of node you may construct is also determined by the planet. Production allows you to build ships and more nodes, science is obviously necessary to improve your tech and culture is what you need for an Ascendancy victory and for influencing other planetary systems as above.

Extermination: Combat is done by rolling a bunch of dice. Laser and shield technologies have an effect on what result you need to hit (and destroy) a ship. Not much more to say here.

The three factions play really different and kind of reflect their counterpart in the series. Still, I have a problem with playing a 4x game in the Star Trek franchise. Star Trek is more about characters and moral questions and not so much about big battles and empire building.

Still, overall, it´s a solid, light 4x game, but without the Star Trek licence, this would probably not be too much of interest. I do a playthrough here.