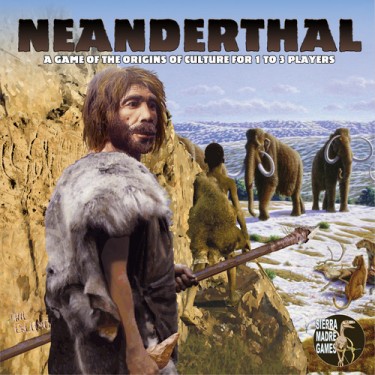 Neanderthal is kind of the sister of Greenland. Three early humans species (Homo Heidelbergensis, Homo Neandertaliensis and Cro Magnon) fight for survival and supremacy in Europe during the ice age.

It´s a card game with a worker placement mechanic: You have to manage your cubes and discs in the most clever way to survive as a species and score the most points. It sounds a little boring, but this is not a simple euro with a theme stripped over. The game is pretty heavy, and the theme really works with the mechanics…it makes a lot of sense.

Your main decision will be, where to assign your hunters: a successful hunt is the key to feed your people. This allows allows to get your daughters and husbands mature, so you can effectivly use their advantages. The daughters provide their babies over the generations with new vocabulary and with new evolutionary steps of the structure of your brain. This will then allow you to get new types of elders and eventually become a tribal species. At that moment you can start domesticating animals and benifit from new technological inventions.

The solo multiplayer takes about two to three hours. Like other Sierra Madre games, it comes with a massive scientific background that shines all through the game. Finally there is a serious game that covers the era of early human life on earth. The art is not overwhelming but functionally. You can see a playthrough here.