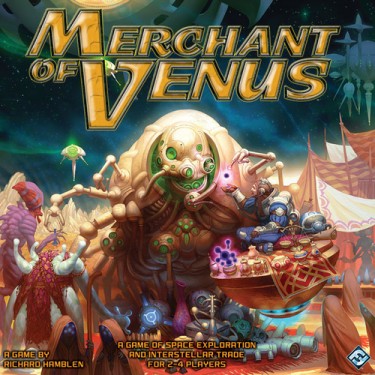 In this classic, originally published by Avalon Hill in the 80’s, players take the role of space traders, who enter an unexplored region of the galaxy and look for some good opportunities to make money. It’s a game for two to four players.  Fantasy Flight Games has done a reprint with a fantastic approach: they have published two versions of the game in one box. The original version, with modern artwork, and a new version with some rule changes. Each version comes with extra components and its own board.  In this way, they are able to satisfy the fans of the old game and also introduce the changes they want.

The basic concept stays the same in both versions: during the first phase of the game, players explore the sector, discovering the needs and offers of the different planets. Their ships are slow and weak. In the following phase, they will establish trade routes, improve their ships and start building trade stations. In the final stage of the game, goods will be harder to find and because ships are now faster and better equipped,  you see a race for the remaining opportunities.

There are many thematic features, like battles against space pirates, asteroid mining, warp gates…Players also complete missions to gain valuable rewards,  transport passengers from one planet to another and improve their pilot skill.

The components are great, although permanently dealing with the money tokens is pretty fiddly. I prefer to use a track here. The board looks wonderful, one of my favourites.

The official solo variant is a problem in my opinion.  You have to fulfill missions in a pretty narrow time frame. The above explained pattern of the game doesn’t apply anymore.  You have to focus entirely on your mission, wich feels pretty stressful. ..A permanent race against time.  The exploring and the feeling of being a free space trader, finding her way through the stars is lost.

I try my own solo variant here.