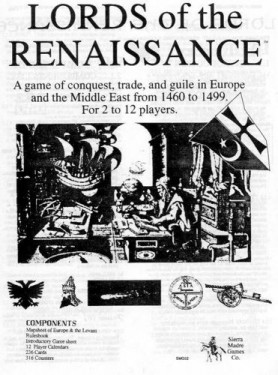 Haven´t played this yet. From BGG:

Lords of the Renaissance is a game for 2-12 players set at the end of the Dark Ages. Each player starts as a Merchant Prince of a European Duchy, operating a bank or merchant company speculating in the silk trade. Players also act as a military or financial adviser to one of the great empires, advising their suzerains in matters of conquest, shipbuilding, and the construction of cathedrals and libraries. Through the establishment of trade routes and the paying of tributes, players grow rich, as they are emboldened to fight to protect their monopolies or expand their influence. Plenty of Machiavellian intrigue as players shift allegiances and conspire to become emperors themselves.