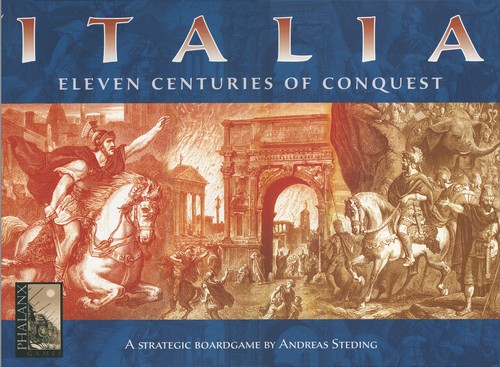 Italia is a light wargame very similiar to the old Avalon Hill classic Britannia. It comes with two scenarios, wich are each very different: one covers the growth of the Roman Republic until the civil war. The other shows the end of the Roman empire and the early Middle Ages. One scenario is for three players, the other for four. Both have their own components and even some specific rules. During the game, each player plays several nations at the same time. The game is highly scripted: Nations gain points for reaching specific goals every turn: controlling specific areas, building cities, pillaging enemy cities. At the end of the game, the player whose nations scored the most overall points, wins the game.

The game comes with different type of units like infantry, legions, elephants or galleys. Combat is handled very simple: Each unit type has a specific combat value. A roll equal to or higher than that value kills an enemy. Terrain and leaders modify the role.

A solid game but pretty long. Plays very well solo. you can see a playthrough here.