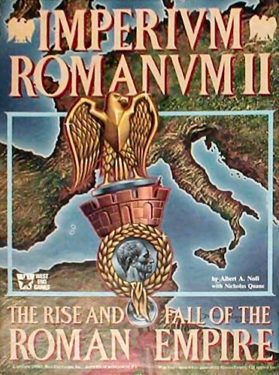 This is one of the few games that doesn´t cover the time of the Roman Republic, but the Roman Empire. We´re talking about 35 scenarios, covering 700 years, from Cesar to Justinian. It tries to do this in a historically accurate way, taking into consideration the change of the topography and infrastructure during this large timescale. But here comes the problem: Most of this is not depicted on the map but on extra maps that you´ll constantly have to check while moving your units (and there are lot´s of them) on the map. Constant calculations about movement and supply depending on the terrain, the season, and the overall time period make this a nightmare when it comes to gameplay. There are even extra rules like flooding rivers, but only in the first month of summer (oh shit, the Nile has an extra rule!).

All this would be okay, if there would be other interesting aspects in the game. Sadly this is not the case. Little economy, very little politics. Even very few battles. It´s extremely hard to force your opponent into a battle. Usually it´s a lot of maneuvering from both sides until they feel enough prepared or simply are fatigued so that it comes to one massive clash. Than you roll exactly one six sider. Usually the larger army wins.

That´s it. It´s a shame, because the map is beautiful and there´s a lot of ambition in the game. I do two playthroughs here.