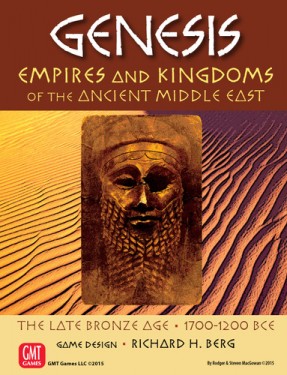 Genesis is a game covering the struggle for power in the near East during the late bronze age. Up to five players control the fate of their empires (Babylonia, Egypt,  Mitanni,  Assyria and Hittite) over a time span of 500 years..if you play the long campaign. It becomes a small monster with a playing time between 20 and 30 hours.

It uses the same system as Pax Romana: Point to Point movement,  Event cards, combat is resolved by a single roll of an attackers and a defender’s die…The result is then  modified and shows the percentage losses of the armies.

The game highly focusses on military aspects: you undertake campaigns led by the king of your empire with the simple goal to conquer economically important cities,  wich will generate income and victory points.

Apart from the other player’s empires, minor kingdoms and barbarian tribes can also mean a threat to you.

Negotiations and diplomacy are highly restricted, technology is limited to three levels of chariot technology.

After a few plays I rated this game now down from a solid 6 to a 4. It simply doesn´t offer enough options and depth for a  playtime of  20+ hours.

In addition,  especially in a five player game, the game seems to have a balance issue: while Mitanni, Assyria and Babylon struggle over a very limited space,  Egypt and Hittite can expand quite a bit without any contact.

In a four player game this should be not a problem though.

The fact that points are counted only after the final turn seems also weird.  No matter how well you did in the first 18 hours,  in the end it comes down to the last turn and things can indeed change dramatically.