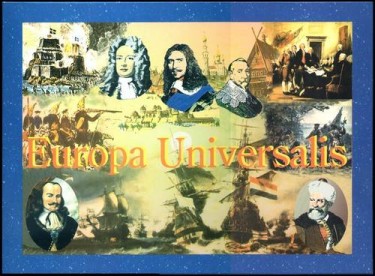 Europa Universalis is one of my very few real monsters. It really plays in its own league.  The scale and depth of this are just so massive, only very few existing board games (if any) might be comparable to this one. To be honest,  I haven’t played it yet, but calandale’s fantastic playthrough with about 40 hours of footage gave me some impression of what to expect.

The game covers 300 years of history,  from 1492 to 1792. The focus lies on the destiny of the main European powers, but also the minor powers in Europe play an important role. Last but not least, the colonies all over the world are a vital factor in the game.

The game is played on two huge maps. One shows only Europe in high detail, the other the rest of the world.

The game is divided in time periods.  The goals of the different powers change during these periods. They might be of military,  economical or diplomatic nature. Here, diplomacy and economics are of enourmous importance and not just some additional chrome to a wargame.

A key element is the event system.  Every turn, economic and political events will occur. The political events change through time, so that some historic accuracy is given,  although there’s still enough randomness to keep things intersting.

From what I’ve seen, this gem definitely has the potential to become one of my top favourites,  but first I’ll have to find to master the rules.