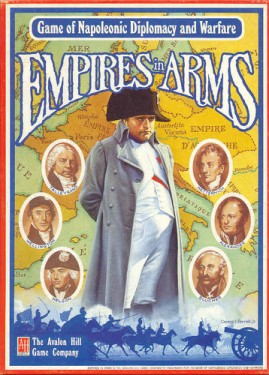 EMPIRES IN ARMS is a game covering the major elements of diplomacy and warfare during the Napoleonic Wars of 1805-1815.
YOU, as a player, are the absolute monarch of a major European power (Austria, France. Great Britain. Prussia. Russia, Spain or Turkey) and guide that nation through the maze of conflicting interests and ambitions that characterized Napoleonic Europe.
Each major power has its own individual economic; military and geographic advantages and disadvantages.
Players negotiate alliances. dictate peace treaties. administer conquests and conduct warfare on land and sea by maneuvering corps and fleets in the constant struggle for survival and prestige.

• Great Military Leaders : Napoleon of France. Nelson of Great Britain. Blucher of Prussia. Prince Charles of Austria and many, many more

• Uncontrolled Major Powers : Rules that allow the realistic use of extra major powers in campaign games when less than seven players are available