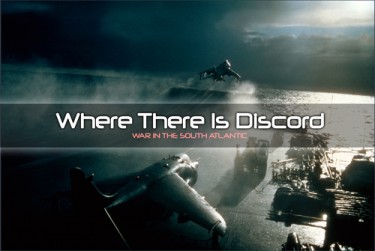 Where there is discord covers the conflict between Britain and Argentina that followed the invasion of the Falklands. It’s a pure solo game, where the player controls the British task force.  During the campaign, as more and more British ships reach the south Atlantic,  there’ll be also more attacks from the argentine air force bases and their fleet. In the final stage of the game, you will eventually land your troops on the islands, where the resistance is hopefully not too bad, depending on how soon you can start the invasion and if you managed to disturb the argentine supply ships.

There are some issues with this game.  First, there is only very little decision making.  Mostly you follow the turn sequence, rolling lot’s and lots of dice and watch the game play itself.  Second it’s the duration: this process will go on for a long time: between five to ten hours I guess.

I like the theme though and it has some intense moments, so I guess on rare occasions I will try it again.

The rules are pretty much a mess, and I can only play this game using a self made player aid. You can see my playthrough here.