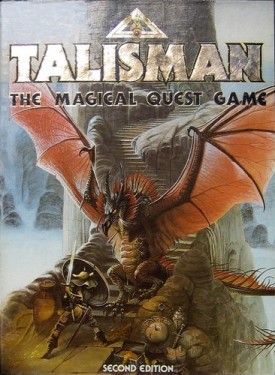 I really find it hard to write about this one. Except for chess, there´s no game that I´ve played that often and that brings so many memories of my childhood back. It was also the first real fantasy adventure game that I could get here in Germany. Through the years, I lost everything except for the Timescape. So although I already had the 4th edition, I decided to purchase the 2nd edition again just because of the memories. And it´s always a great feeling spending time playing this…

Gameplay is very simple: you roll a die and move that many spaces in any direction. Then you resolve the text on that space. Mostly you´ll have to draw an event card. You will have to fight all kinds of enemies, including the other players, gain items and followers, find mysterious locations and even learn magical spells. With time, your hero will improve and be able to enter the inner region, where great dangers are waiting. But before he can reach the Crown of Command and win the game, he must find a special item: The Talisman!

The component quality are not that great: It´s an 80´s game, so you cannot expect the same as today. Miniatures do exist, but you had to buy them extra, so most people will use the paper stands of the game, wich is for me part of my memory and therefore perfectly fine. The art is beautful: It´s a very clear and unique style. Not much chrome or details, but still a lot of atmosphere. You can see a playthrough here. 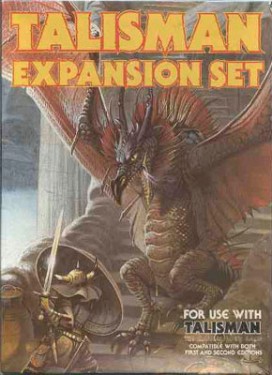 This expansion comes with new characters and cards. 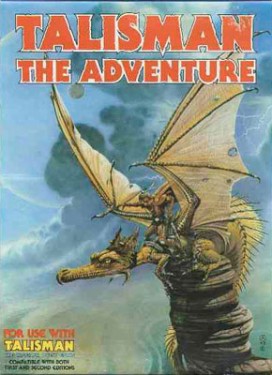 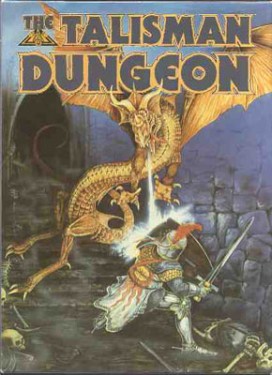 This expansion adds an extra board: the dungeon wich also comes with its own deck of Adventure Cards.  Players may enter the dungeon through entrances on Adventure Cards drawn from the base deck. Threats are more dangerous in the dungeon,  but there are also very powerful treasures to win. If you make it through the dungeon,  you’ll be teleported back to the main board…I’d you’re very lucky even to the Crown of Command. 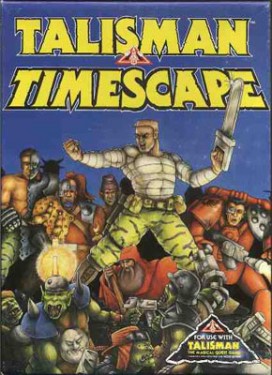 With the Timescape, Games Workshop introduced elements from the Warhammer 40k universe into the system. There’s an extra board with different world’s that you will travel.  You’ll meet alien creatures and find advanced artefacts. Even the new heroes fit in this scenario, i.e. the  Space Marine, the Astropath or the Chainsaw Warrior. Many fans of the base game rejected this expansion as unfitting to the fantasy scenario,  but I enjoy it a lot! 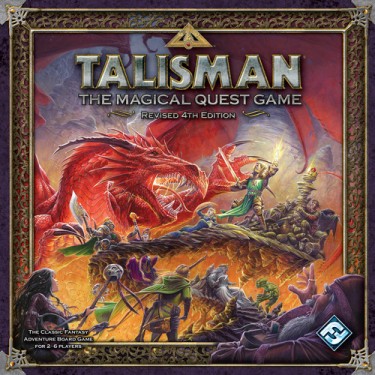 The fourth edition was first done by Black Industries.  For reasons I don’t know, they didn’t continue the product line. Instead, Fantasy Flight Games got the license and they did a revised fourth edition. Compared to the second edition, the changes affect basically the artwork.  The simple, straight art had to give way to a very colourful and cartoony style of the board. The cards are of a more realistic modern art. First I was pretty irritated,  but now, as I got used to it, I like it a lot. We have now also very detailed, fantastic miniatures. It’s sad, that the Adventure Cards are of such a small size, so it’s hard to really enjoy the detailed art.

The only new element they introduced gameplaywise is an additional resource: fate. You may gain fate tokens similar to gold, and they allow you to reroll a die.

Overall, I think FFG did a great job with the fourth edition and it’s a worthy successor to the wonderful classic. Playthroughs are here. 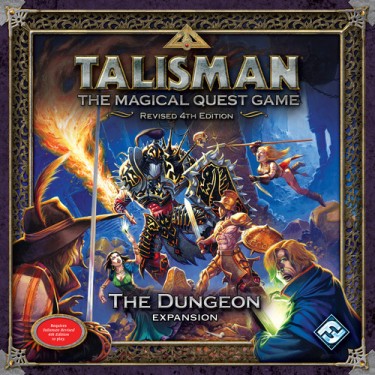 Like the Dungeon expansion of the second edition, this box comes with an additional board, special Dungeon cards and new characters.  After exploring the new board, players will face a demon. As reward for defeating him, they’ll gain a powerful relic and will then be teleported back on the main board. 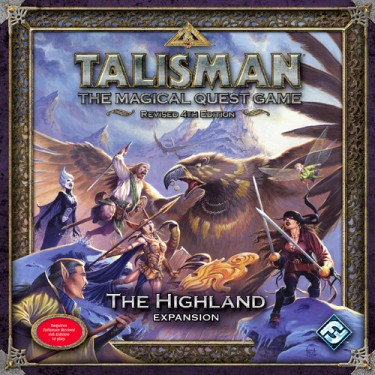 The Highland expansion follows the same concept as the Dungeon: players travel on an extra board and encounter specific events.  In the end,  they fight the Eagle King and may gain a special artefact 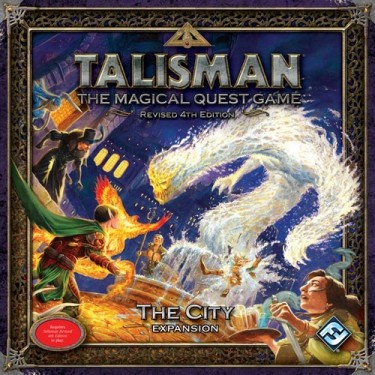 The City expansion adds also a new board, special cards and characters.  Players may explore the streets of the city, but may also visit shops, temples and other interesting locations. 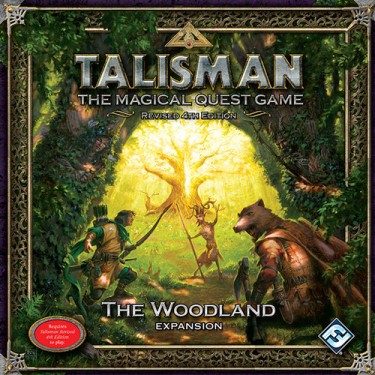 My copy of this is still shrink wrapped, but it seems to be similar to the Highlands or the Dungeon. 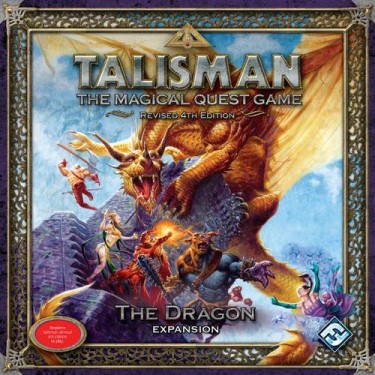 The Dragon expansion takes a new approach: The inner region is replaced by an overlay board, which focuses on the dragon theme. Players are traveling the land, while three dragon Lords fight for the crown of the Dragon king. The course of this fight affects the events that players have to face. I have only played this expansion once,  so I don’t know too much about it. I could imagine though, that it doesn’t really work well with the other expansions. 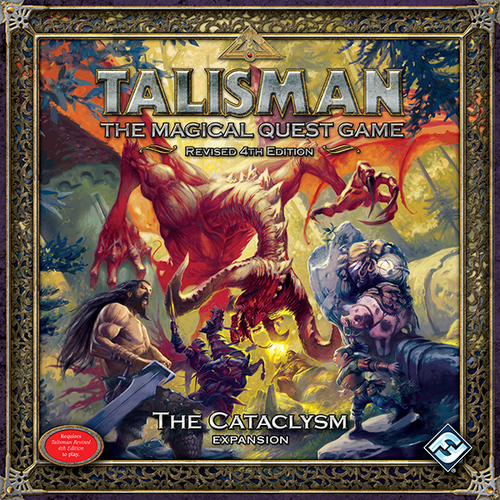 The Cataclysm seems more like a stand alone box than a simple expansion. It adds a new basic board, characters, cards and mechanics. It shows a time where the world of Talisman lies in ruins and dark forces have taken over. A time that takes place after The Harbinger expansion. I haven´t played it yet, so for now, I cannot say more about it.

All of the following small box expansions add additional Adventure Cards and spells and characters to the base game. 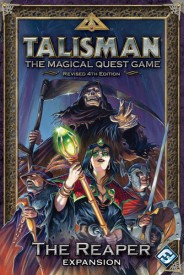 This expansion comes with a special miniature: the Grim Reaper. If a player rolls a six, she may roll again for the Reaper. If the Reaper enters a space with another player,  that player has to encounter him, wich is mostly bad, even to the point of instant dead. 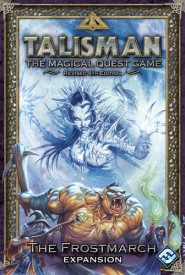 Here, new Warlock Quests that will gain you a Talisman are introduced as well as some alternate endings. 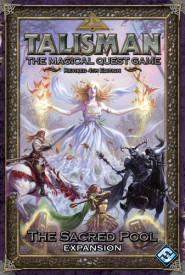 This comes with new Reward cards that you may gain when you´ve fullfilled a Warlock quest instead of a Talisman….if you wish. 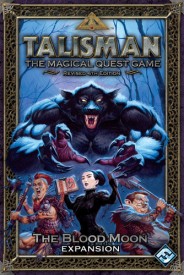 The Blood Moon introduces a Werewolf miniature,  wich works similar to the Grim Reaper above. A day and night cycle is introduced: by day, monsters have one additional strength/spirit,  by night one less. 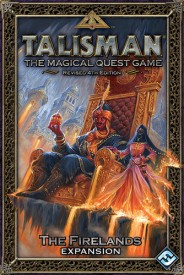 The Fireland expansion comes with Adventure Cards that will destroy key spaces on the board like the chapel or the village. 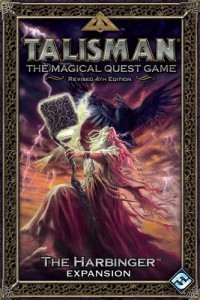 This expansion adds an important mechanism: 7 Omen cards work as a timer. When they are all played, apocalypse has arrived, the game is over and everyone has lost. Specific Harbinger cards are added and make the game darker, and more difficult. It changes the atmosphere quite a bit, and players have to rush quite a bit if they wanna make it into the center. Not sure if I really like this, but from time to time it might be an interesting alternative. 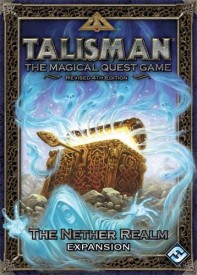 This is just a small print on demand expansion with 30 cards and three alternate endings. Instead of the standard encounters in the inner region, there are now specific, very poweful enemies. 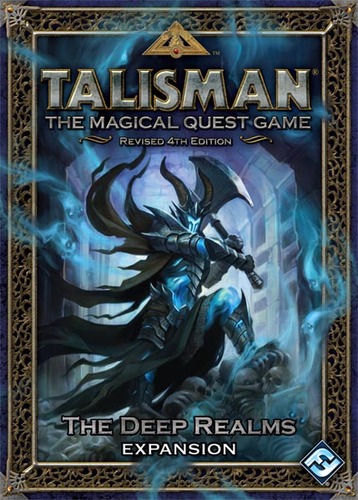 Another small expansion. It adds a connection between the City board and the Dungeon board.

The following expansions are all fanmade. Their quality though is absolutely comparable to the official content.  They all come with an extra board and about a hundred cards. 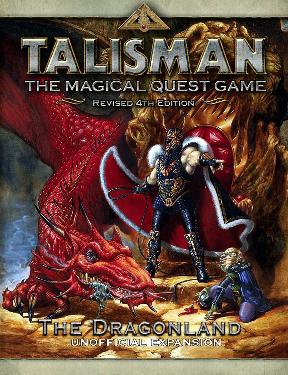 Well, as the name suggests, this expansion focuses on dragons. 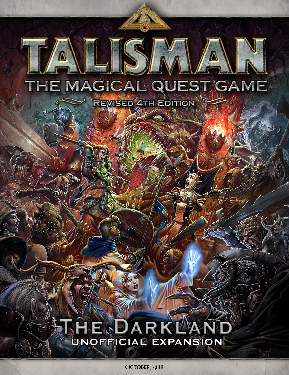 In this region,  you’ll find all kinds of wonder and terror. The interesting idea is, that monsters here become stronger the more you kill. 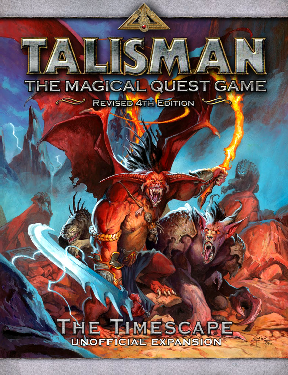 This is a direct conversion of the second edition Timescape with a few more cards and great modern artwork.