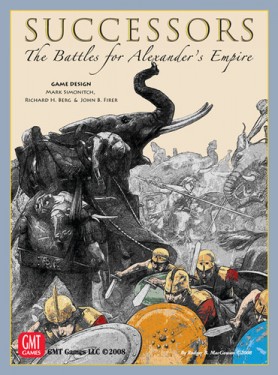 When Alexander the Great died in 323 BC, he left no clear heir to the immense empire he had conquered. It was not long after his death that the Macedonian generals began to war among themselves over who would be the regent or successor to Alexander’s empire. By 305 BC they had given up on succession and began to carve out their own kingdoms. Successors is a four-player game based on those wars.

Players control generals fighting for victory and legitimacy points. Both ways can lead to victory. Victory points are gained by political control of provinces. Legitimacy points can be gained for controlling Alexanders family and for burying Alexander´s body, especially in Pellas. To achieve the latter, you have to transport it from Babylon to Macedonia, fighting your way through your rival´s troops.

The game is basically a typical CDG: Players can either play their cards for the event or for cammand points. These allow them to either place political influence, train new troops or move a single army. Now, different to many other CDG´s, in addition to the card play, players can move every single army once per round.

An interesting mechanism is the Champion status: Every player starts as a champion, which gives him some extra legitimacy points. If a player attacks a champion, he loses his status and therefore the points and becomes a Successor. An exception is the Usurper (the player with the most victory points), who can be attacked with no penalty. This leads to some interesting strategic decisions in the first one or two turns, where usually not too much combat occurs. Once a few players have lost their champion status, all hell breaks lose.

Successors is a very enjoyable CDG. Compared to others it´s of a medium difficulty and also not too long. Maybe it lacks a little chrome though.