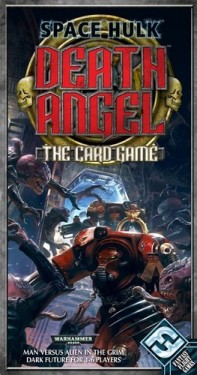 Space Hulk – Death Angel is a conversion of the Space Hulk table top game into a card game. It´s a cooperative game for one to six players. Depending on the players number, each player controls one or more squads of two Space Marines. Each Space Marine is represented by a card, that lies in a row, the so called “formation”. Next to the formation, different locations are placed, represented by room cards, like doors, ventilation shafts, dark corners…Controlled by cards, Tyranids will appear in these locations and attack the formation. The more they are, the more likely is it that they will succeed and slay the Marines.

Now each squad can choose each turn to play a card. There are bascially three types: Attack allows you to do an attack roll against a swarm of genestealers in range and the direction of your facing. Move & Activate allows you to change facing and position in the formation and activate locations like doors. Support places a support token on a Space Marine wich allows him to reroll a die. All these cards also give you a special action ( some special ability of the squad members) .The tricky point is that a squad is not allowed to play the same card in two consecutive turns. So you cannot attack all the time, but have to find a clever way to manage your cards. You can move on into the next room, if you´ve killed every Genestealer in the previous room. If you made it to the fourth room, there´ll be some special task before you´ve won the game.

The game is really hard to beat. The basic rules are simple, still the learning curve can be pretty high, especially if you control more squads and have to keep in mind all their special abilities. The art is okay and I think they really did a fine conversion with this. 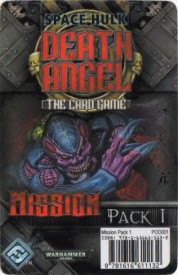 This expansion adds some new location cards and enemies. 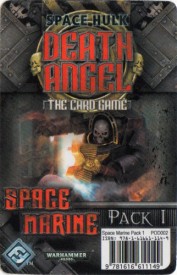 I was a little disappointed by this expansion: basically all you get are two new squads (ten cards). In addition you´ll get cards to help you determine wich squads to play with. WTF?? Anyway, I´ll do a playthrough with these guys here. 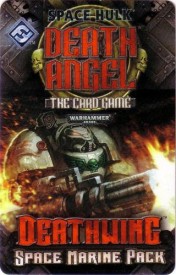 This expansion gives you a complete new unit: The Deathwing. You´ll get six new squads of space Marines with all kinds of new special abilities. 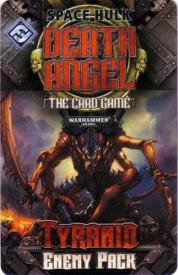 This expansion comes with deadlier enemies. You can replace the old ones or mix them.