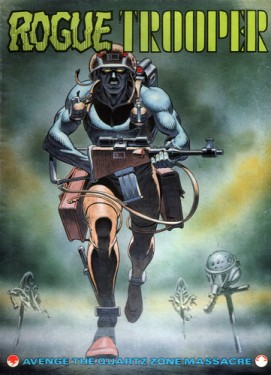 For decades, there´s now war on the planet of Nu Earth. North is fighting against south. In this classic Games Workshop Game of the 80´s, you as a player take the role of a cybernetic soldier whose unit was betrayed and completely defeated. You´re the only survivor. So now it´s up to you to find the traitor and take horrible revenge!
You´ll get random missions wich will bring you to different places on the planet, where you can find agents that might provide you with valuable information. Every turn you draw a card from the event deck. Mostly you´ll have to encounter an enemy: You might either fight him or try to hide. Depending on the enemy, your different types of (limited) ammo might be more or less efficient. The other thing you might get from cards are weapons or allies. If the event deck is empty before you´ve killed the traitor, the game is lost.

Once you have enough clues to know who and where the traitor is, you try to hunt him down and do a big final fight. If you kill him, you win!

This is a very simple game, but because of the great vintage style and the great theme, it´s a fun game.