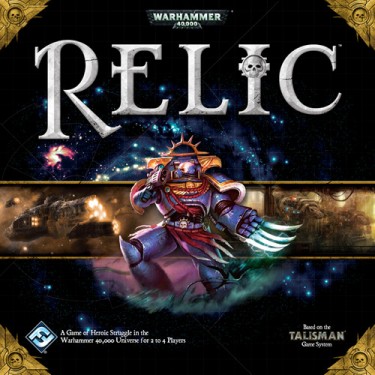 Relic is simply a conversion of the classic adventure game Talisman into the world of Warhammer 40k with a few twists. Instead of two characteristics (strength and craft), players have now three: strength, will and cunning. There are now also three adventure decks, each focusing on a single characteristic.  The spaces on the board now indicate from wich pile to draw. This way, you kind of know what to expect, although there are always surprises.

Another innovation are the corruption cards, that you’ll gain due to certain events. The more your character has, the bigger their effects will be…for good or bad.

The art is really good.  The board is simply mindblowing, one of the most beautiful boards I’ve ever seen. The minis look also really great.

In the base game, there is no player vs. player combat.

I enjoy to play Relic solo in this split personality way, simply to follow the story. Without hidden information and no heavy decisions,  it works really well solo as you can see in my playthrough here.

This is the first expansion and it completely focuses on player vs. player mechanics. So called skill challenges are introduced, where imperium players can battle eachother doing skill tests. This can only happen under specific conditions though.

A complete new character type is introduced too: The Nemeses. In a three or four player game, only one player may control a Nemesis. A five or six player game (wich is now possible with this expansion) allows up to two Nemeses. These are enemies to the imperium: a Chaos Daemonette, a corrupted Berseker, an Eldar Exarch and a Genestealer Broodlord. Each of them has it´s special abilities and comes with it´s on deck of cards that help to fight the imperium. On a Space with a box, they don´t resolve the box text but instead draw one of these cards. They also draw from a special “Imperium” deck when drawing “adventure cards”, so they face their own enemies and dangers. Of course they can also battle the other players.

The Nemeses don´t win by entering the middle space…they wanna gain 25 infamy. Each Nemesis has a special way to gain that resource, wich makes it quite thematic. Usually one way is defeating the characters in battle or levelling up, which works similiar to the levelling up of the characters: collecting six points worth of enemy trophies.

Overall a good expansion, especially if you missed the player vs player element in the base game.

Adds a board, characters, Nemeses, and tons of cards.

Probably the last expansion for this game. For some reason I got a feeling, they won´t support this anymore…