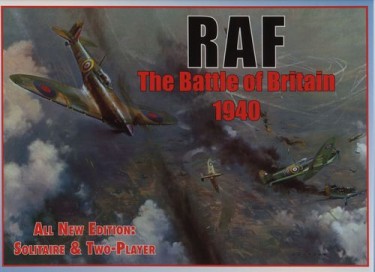 In august 1940, Hitler ordered his Luftwaffe to fly attacks against Britain.  They were supposed to gain air superiority in order to support the planned operation Sea Lion: the invasion of England. In the following weeks, the battle of Britain occurred, wich was the first campaign that was only fought in the air in military history.

RAF comes with three different games, each with its own board and rules.

Lion: This variant allows the player to take the British side. It’s a pure solitaire game and the Luftwaffe is controlled by the game. The duration of the game is determined by different scenarios. You might play from a single raid day up to the whole campaign. At the beginning of a day, the player sends his squadrons on patrols, trying to cover as much air space as possible.  But he should consider that they’ll have to land to refuel, so it makes sense not to start them all at once.

During the day, the Germans will launch numerous raids on British targets. These raids consist of a number of bomber Gruppen (German for squadrons), protected by fighter Gruppen. The player does a “detection roll” wich is modified by different factors like weather, raid size or number of working radar installations. Depending on the role’s result, he will get more or less detailed information. Also the reaction time for the squadrons depends on that roll wich determines wich of them are in range. The player can now decide who’s gonna try to intercept the raid. With a single roll of a six sided die combat is resolved. If the player can not intercept all bombers, they will then bombard the target. For destroying Gruppen the player will gain victory points. He will lose points for losing squadrons or taking damage from bombing. The total of points will in the end determine the outcome of the scenario.

RAF Lion is a game with intense moments but also many issues: The two main ones are the facts that it’s highly repetitive and that there are only little decisions to make. Most of the time, the game plays itself. Considering its very long duration, this becomes extremely exhausting.  Still, on rare occasions, I give it a shot. You can see a playthrough here.

Eagle: In this variant, the player controls the Luftwaffe. It plays in many things similar to Lion, but to me it seems, there are even less decisions to make, although most people seem to think differently about this point.

At the beginning of the day, the player selects wich raids to launch at what time. His choice is limited to a few drawn target cards. Then he assigns bombers and fighters to the raids. That’s it. From now on he will watch the game play itself until the start of the next day, wich will take maybe two hours. The A.I. feels also more fiddly than in Lion. I’ve played this once and probably won’t play it again.

Lion vs. Eagle: I haven’t played this one.  It’s a two player game, but although it might not be fair: I’m pretty sure there are better two player wargames than this.