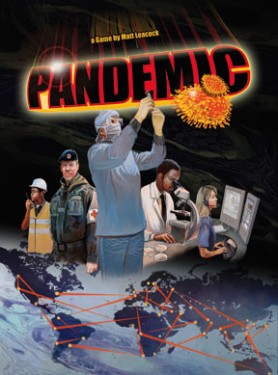 In this game, players cooperativly try to save humanity from getting extinct by a pandemic. Each player takes the role of a disease specialist with a specific ability.  There are four deseases, represented by cubes of different colours,  threatening mankind.  The goal for the players is to find a cure for all of them, before too many outbreaks have occurred. The game has two phases: the infection phase and the player phase. In the first phase,  a number of infection cards, that increases with the course of the game, is drawn, wich indicate, in which city to place a cube. The colour of the cube depends on the region where it is placed. If ever a fourth cube would be placed in the same city, an outbreak occurs. The fourth cube is not placed, instead you place one in each adjacent city. This can lead to devastating chain reactions.

In the player action phase, players can fight back. They have a hand of city cards. If they discard five city cards of the same colour while in a research centre,  they’ve developed a cure. Players can trade a city card, if they both are in exact that city. They can also move greater distances by discarding these cards. So, there’s often the decision to make,  if you want to travel fast or collect cards. Players might also heal (remove a cube from their location) or build a research centre. At the end of this phase, players will redraw. Some cards will trigger an epidemic,  wich forces you to place three cubes in one single city and to shuffle the discard pile of the infection deck and place it back on top of it. In this way, the cities that where infected earlier will be infected again in the following turns.

Pandemic is possibly my favorite straight euro game: I can see the beauty in the mechanics, I love the high tension. The theme doesn’t feel just wrapped over, it really fits well. As a coop, it plays perfectly solo. 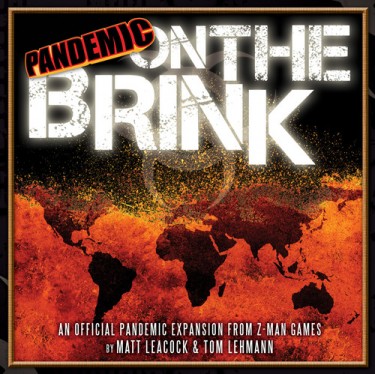 This expansion adds a lot new features to the game.  You get more characters, new event and new epidemic cards: the virulent strain. One of the deseases will now have a special characteristic , wich will make it even harder to control. You can see a playthrough here.

The virus can now also mutate, wich will bring a fifth disease on the board.

In addition,  you can play now a semi-coop variant: one player takes the role of a bio terrorist, spreading the virus over the world. I haven’t played this variant, so I can’t write more about it. Overall it’s an excellent expansion.