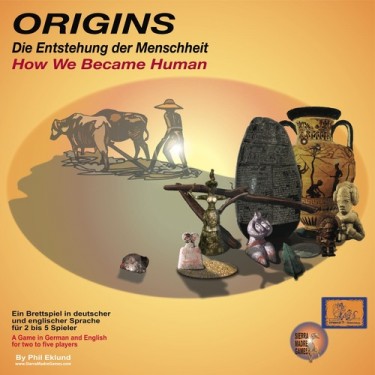 You control a civilization from its earliest beginnings till the middle ages.

You actually start with developing the brain of your species to give them the abilities of speaking and socialising. During the game you improve your technological knowledge wich will give you more possibilities in settling, fighting, travelling, gaining cultural achievements and so on.

The board is a world map. Regions distinguish each other in fertility and will only provide food for a limited number of people, depending on your technological progress. If you spread out,  you’ll sooner or later find yourself in a conflict with your neighbours.  You can also do agriculture and mining to improve your situation.

The game is pretty much a Euro. Components are good, the rules are terrible as everyone who ever played a Phil Eklund game might guess.

Compared to 7 Ages, this game feels pretty abstract, for me actually too abstract. I don´t wanna get too deep into this, but I got the feeling that the game comes with some flaws. The option to steal cards from another player will often prevent you from drawing cards from the deck as long as there are other cards that might give you an advantage already in play. This probably slows the game down quite a bit. Some things like domestication or a chance of revolution depend on a single die roll, but the consequences are often significant. Once you´re civilization becomes unbalanced, it feels pretty hard to regain control and you lose very fast the capability of doing anything at all….

This expansion is simply a deck of cards, that covers modern technology. Now players can finally use the full tech track wich you could already find on the board.  This is another slightly bothering aspect of some Phil Eklund games, that as long as you don’t buy the expansion, it feels like you do not own a complete game.