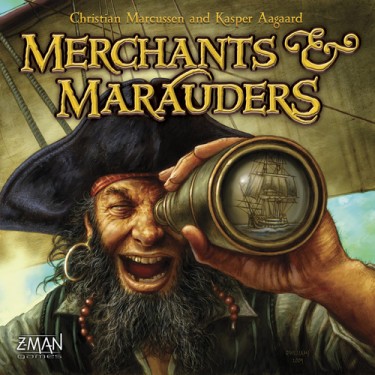 This game is settled during the golden age of piracy in the carribean sea. You’re the captain of a tiny ship and basically free to do whatever you want.  You win if you gained a certain amount of points. You’ll get points by collecting money or from glorious deeds like fighting or fulfilling missions. In general there are two approaches: you might be a trader or a pirate. As a trader you do the pick up and deliver thing. I don’t think I have to explain much about the pirate’s life.

You might also change your mind: after you’ve started as a trader, you might still attack other ships. You can also hunt down pirates collecting some bounties.

In addition to the players, lots of non player vessels are travelling the sea. The different colonial powers are in constant conflict.  You, as a citizen of one of them will be affected by the overall political situation (i.e. you might not have access to the enemy’s ports).

You can also upgrade your vessel, buy a better one and hire a crew. Each port offers you some special benefit if you land there.

Battle is highly thematic. First you gotta be fast enough to come close to the enemy, in case he tries to escape. Then you can shoot your cannons. Different ammo types can do different types of danage, i.e. killing the crew or destroying the sails. You might get even close enough to send a boarding party and the crews fight in close combat. If you win, you might take the load of the defeated ship or simply leave your old vessel and take the other one, if it is better.

Components and art is great, the game drops of theme and you feel really free in your decisions.

I enjoy this game a lot. Sadly, there’s no official solo variant.