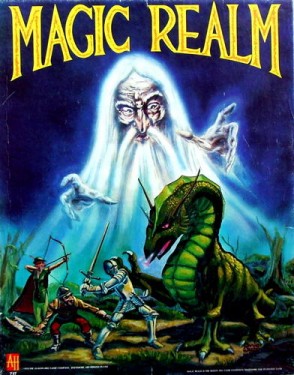 This is a real classic.  It’s also one of the most complicated games out there.  I’ve tried twice to get completely into the rules, but until now, I wasn’t successful.

The player controls one of 16 different types of heroes. He can decide how he wants to make points: by finding treasure,  killing enemies, gaining spells. .. After a certain number of rounds, the  most successful player wins. You can also play this game solo, just trying to accomplish your own goal.

Players have four actions each day. They may i.e. move, hide, search or trade. They have to write down their actions at the beginning of the day and then follow this plan. If they are successful is determined by dice rolling.

The combat system is very unique but also terribly complicated. It tries to simulate the movement and speed of the competitors, but in the end it feels pretty random and overly complicated for what you get.

The rules are terrible. The fanbase has come up with a 3rd edition, wich is possibly better but still terrible. The components are from the eighties and therefore a little poor with little artwork: players and monsters are only represented by chits. Treasures by very thin and small pieces of paper.  The tiles show some basic art, but they are okay.

I’m not sure what to think about this game. I like the modular board and all the options that you have. On the other hand, there’s a lot of luck involved,  if it comes to successfully doing some actions. Sometimes you might stand days next to a treasure rolling dice, because you simply cannot find it. The game is famous for the freedom players have during their journey,  but I felt too often like a slave to dice.

Until now, I just did some poor approaches to this game, and I have my doubts, that it’s worth all the pain. Still, I’m definitely gonna try it again.