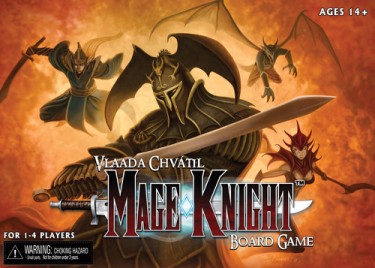 The Atlantean Empire is struggling for survival in these chaotic times, and the Council of the Void has given its Mage Knights the order to conquer it. You are one of these Mage Knights, extremly powerful creatures, capable of defeating whole armies on their own. And although you don´t know the greater benefit of your mission, it´s your holy duty to fulfill the will of the council!

Mage Knight is one of the most popular and successful games of the last years. It´s a game from one to four players. There is a solo, a cooperative and a competitive variant.

It´s basically a deckbuilding game. Each player starts with the same deck except for two cards wich are unique in every deck. Players have three basic actions: move, attack and block attacks. The cards allow you to perform these actions. Each card comes with a weaker and a stronger effect. To gain the benefit of the stronger effect, players have to spend mana of the card´s colour. Usually you gain mana from the mana source, a number of dice that show the four basic coulours of mana and two special ones. You may only use one single die per turn. There are other ways to gain and even store mana wich is a critical point of the game.

By killing monsters and conquering locations you´ll gain experience and will eventually level up. This way you will improve your character by gaining higher armour, higher hand limit and special abilities. You will also improve your deck with advanced cards that are much stronger than the starting cards. You may add spells and artifacts to your deck, both very powerful, but not that easy to gain. If you take wounds from battle, you will have to add wound cards to your deck, wich will slow you down quite a bit.

What I love about this game is the feeling of freedom in this world. You explore a modular board, and there is no determined path what to do. You can fight marauding orcs or kill dragons wich will give you a higher reputation. This will make it easier for you to higher allies, wich help you in many ways. You could also burn down villages and monastries….people won´t admire you for doing so, but you´re the powerful Mage Knight, and you don´t care if some monks find a place to sleep as long as you have that valuable artifact that they have kept hidden.

The game is pretty complex though, and if you play with more than two players, the downtime will probably become huge, although I haven´t tried that yet. The components are okay though not great: I like the prepainted minis, but the cards are very thin and the board tiles and some markers have minor buckles here and there. The art is absolut fantastic though.

The game plays very well solo. You play against a dummy player and can adjust the difficulty. I enjoy this game a lot: Once you´ve digested the rules, it´s a challenging and really satisfying experience. It can be frustrating from time to time: If you are unlucky with your hand, there might be situations where you are pretty much stuck and can´t do too much.

For me, the main issue is, that you can often realize somewhere in the middle of the game, that you will not be able to fulfill your task by the time given. Still, you gain victory points for what you´ve achieved. So, if you see the game not as a loss if you don´t manage to reach the final goal, but if you still can appreciate a good result in victory points, this might be less important. 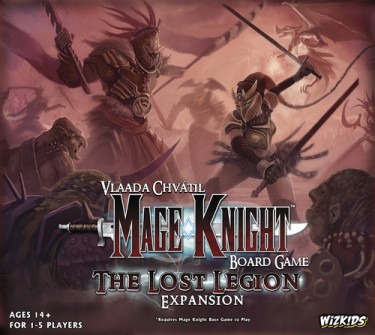 During the Ages of Chaos, the most powerful general of the Atlanteans, Volkare, has vanished…now he returned with his remaining army and new allies: orcs and dragons!

And he´s on the hunt for the Mage Knights! So it´s now up to you to build up your strength and defeat him and his army in an epic battle! 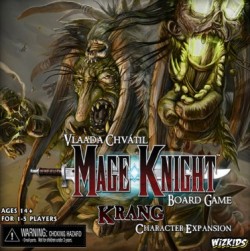 This is simply a character expansion with a new miniature, new cards and abilities. I play with this guy here.