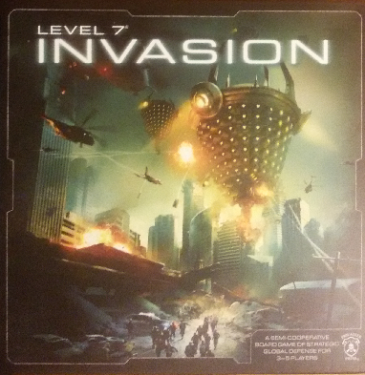 Level 7 [Invasion] is a semi cooperative strategy game settled in the Level 7 universe, where players unite with the Ghin to defend the earth from the attack of the Hydra. The Hydra are controlled by the game, while the players have to work together to reach their goal, wich is to hold back the aliens until Dr. Cronos has developed an advanced weapon wich will blow these bastards to the other end of the galaxy.

The board shows a world map wich is divided in five main regions, each controlled by a player. The players have to manage their resources (money, food, fuel, minerals and industrial capacity) to deploy soldiers, recruit Ghin mercenaries, improve their technology and finance the Cronos Project. The Hydra forces are controlled by event cards: Apart from their troops, they use other measures like crop decimation, propaganda, bombardement from orbit…In addition, they use drop ships to deploy their units on the board.

Combat is pretty simple: There´s a custom six sided die. The faction with the higher strength wins on three sides. A tie occurs on two sides and the weaker faction wins on one side. The loser has to remove a unit. On a tie both remove a unit. Combat goes on until only one faction is left in a region. If at the end of a turn invader units are left in a region, the player will suffer a penalty.

If a player has no more industrial capacity left, he´s out of the game. The remaining players win if they manage to fund all the steps necessary for Dr. Cronos to develop the weapon.

This is definitely a  pretty good game. Especially for a solo gamer it´s interesting, because there are not too many games of that kind that can be played coop or solo. It´s not easy though: You have to handle all five factions, because the game is never played with less. Therefore, the duration, if played solo, is pretty long, maybe between six to eight hours. You´ll find a playthrough here.