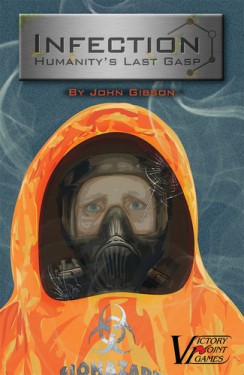 At the beginning, it was only a small outbreak in some poor country in Africa. Nobody in the western world was really concerned. Then, as the victims where thousands, it became a headline, but still only few governments were willing to help and send people or money. Now it might be too late. The deadly desease has eventually become a worldwide pandemic with millions of deaths. You´re the manager of a research centre, and maybe your team might be the last chance for mankind to survive.

Infection is a solitaire game. The player needs to find the cure for a desease. The bacterium (or virus…depends on the difficulty) consists of different molecules. To find a cure, you have to grow the right proteins that will destroy the molecules. Some molecules are more complex than others. They will need more proteins to be defeated. I have no idea if this makes any sense in a scientific way…

The problem is, that you only have limited funding. Growing proteins costs money. You can do this in a more efficient way by hiring qualified personal or buying better equippment.

So while you are trying to get things working, the world outside is falling apart. Your workers are concerned about their families, everyone´s nervous, somebody makes a mistake and yet you have a real problem with the team spirit.

The game is driven by cards. They show if the virus will mutate, wich makes it harder to find a cure. They also confront you with events in the lab and events in the outside world that influence how badly the virus spreads.

The game will be more and more a race against time….will you find a cure before nobody outside of your lab is left alive?

Infection is a fast, pretty simple game. Although you can see the simple mechanic shine through, there´s still a lot of theme and I enjoy it quite a bit.

You find a playthough here.