It´s the near future. Mankind has developed the technology to construct rockets that allow us to industrialize and colonize space!

In High Frontier, each player is controlling a space agency. You´re planning missions and construct rockets to subdue the inner solar system. The map looks fascinating: Not only the inner planets are shown, but also dozens of asteroids and comets! Lines and spaces that connect the objects do not represent their distance from eachother but the energy it takes to move from one to another.

To construct a rocket, players need to research different components like thrusters, robonauts (kind of robots), raffineries (they allow you to build space fabrics). You need enough fuel tanks to get to your destination…but consider, the more fuel tanks you have, the more weight does your rocket carry. Maybe better use a sun sail…?

Factories and other achievements give you victory points. If a certain number of factories is built, the game ends…winner is the player with the most points.

It´s so hard to write about this game….. The rules are terrible and although there are solitaire variants out there, they are not satisfying for me. It feels extremely realistic: As far as I know, the designer is a rocket scientist, and you feel that during play. This is no wild sci-fi stuff, it´s all based on solid science.

High Frontier introduces some fantastic ideas, and there is no game that can give you such a deep experience of space travel as far as I know. But it also has flaws, it´s higly complex and to play this solo, we need a lot of new rules and ideas. I was actually thinking about implementing a game like Manhattan Project, where you do research by worker placement, and qualify your people by sending them to university and things like this. You might be allowed to construct more than one rocket, and maybe get some random goals, so that you won´t play the game the  same way each time…

There´s a lot to develop, and if someone is willing to help, let me know! 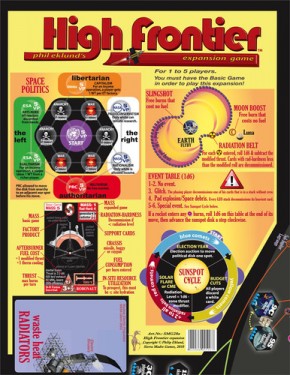 This expansion adds the second half of the map, wich includes now Jupiter and Saturn with their moons and more small objects. You´ll see also more technologies like radiators or reactors. This makes it now even harder to build a working rocket…

Poilitics and war are now added and give the player a feeling of freedom that only very few games do. There are so many ways to play this game, it can be a little overwhelming.

If you´re thinking about purchasing the Colonization expansion, you won´t need this one. There´s this one and much more included in Colonization. 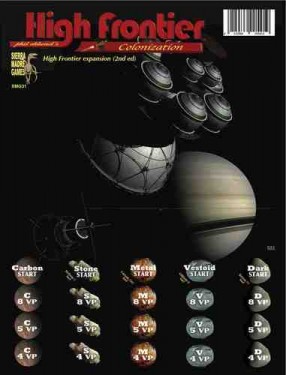 You think High Frontier with the first expansion is deep and overwhelming….well, take a look at this. This expansion seems to take the game to another level of complexety and freedom. We´ll find now basically the whole solar system, including the Cuiper Belt and Sedna, on the map. I haven´t played this yet, but I read about things like bernals, better space colonies, new politics, a new sun spot cycle and all kinds of new cards. There´s also a new solo variant, so maybe I can enjoy this one more than the others. 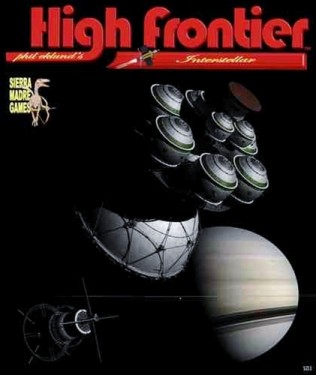 I haven´t played this one either.

It´s a pure solitaire game, and it seems to be more an offspring than an expansion. You need the base game and Colonization, but the rules seem to be quite different and you play on a new (poster) map. You can download the rules here and order the poster map at Zazzle.

Basically you are in control of a Colony Spaceship, trying to find a habitable planet in some not too far away star system.

You can also play it in connection with Colonization, but my respect of these two is too big right now to give it a try.

If I just read the first lines of the rulebook, I´m already blown away:

Unlike traditional spaceships, your starship can be reconfigured while underway.  The basic pattern: the scientists dream up new ideas, and the engineers incorporate the improvements into the design, using 3D printers and nano-configuration refineries. The idea is to lighten the hull enough so that additional impulses are available for going faster or stopping. If a breakthrough in protium fusion is made, the mass saved can be such to power protium rockets for braking thrust. Pilots have the special ability to brake the starship without using fuel, by drogue braking at gas giants, heliopause bow shock surfing on the Local Interstellar Cloud (LIC), using antimatter-fueled beam-core rockets, or using interplanetary magnetic fields.   OMG!!!!