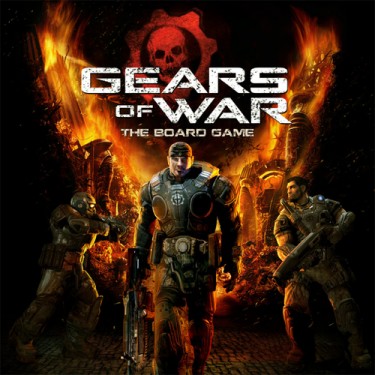 While humans are fighting for decades for supremacy of the planet Sera, they are attacked by an alien species: the Locust. Although they manage to unite and fight back, they are nearly defeated, because the Locust´s tactic to operate from underground proves to be extremely efficient. As a last effort, the special forces “Gears of War” are founded….it´s now in their hands to change the war and give back hope to mankind.

Gears of War, wich is based on a computer game, plays pretty much like a tactical shooter. Players fight together against the Locust´s hoards, trying to fulfill different missions. The game is played on fantastic looking map tiles, wich are placed semi randomly. This way, the mission maps offer lots of possible layouts.

The actions of the players are determined by a hand of cards. Depending on the cards played, they can move, attack or do special manoevres. There is also the possibility to play a card while the aliens are activated. This is called reaction  and allows the player to attack or to dodge from the enemies attack. The cards also represent life points. If a player takes a wound, she has to discard a card. I love this simple mechanic: the more wounds you have, the less actions are available. At the end of the turn, players can redraw two cards. If you ever have no cards left, you are bleeding out. You are not allowed to draw cards at the and of the turn anymore, until you are “revived” by another hero.

If you kill one of the Locusts, just like in a shooter on the computer, it might lose a weapon or some ammo. Standard ammo is unlimited, but there are special modes for each weapon, that are usually much more powerful, that can be only activated by spending ammo tokens.

Compared to other Dungeon Crawls (Dungeons & Dragons, Shadows of Brimstone), here the terrain shown on the map tiles does actually matter. You can go for example into cover, wich is a crucial aspect of the game. Overall, the game feels more tactical than the light Dungeon Crawls mentioned.

The A.I. is a little more sophisticated than the one in D&D: The different types of Locusts behave in different ways, only some are activated each turn, so they are not as predictable as in most other games.

I´d love to see a little more differences in the characters: they play all more or less the same.

The art is very good, the map tiles look so great, minis are also top quality!

Overall, the game is very good and offers more features and better art than for example D&D. For some reason I still prefer the ladder though…maybe the fact that you gain more different items as loot might be an important part. The missions in GoW also seem too long: they will often take three hours or longer and become repetitive with time.

The playthrough is here.

This small card expansion adds actually a lot of variety: There are some new missions, new weapons, and some new monsters. They don´t come with their own minis, but they´re supposed to be other types of the already existing ones, so you simply can use the old minis.