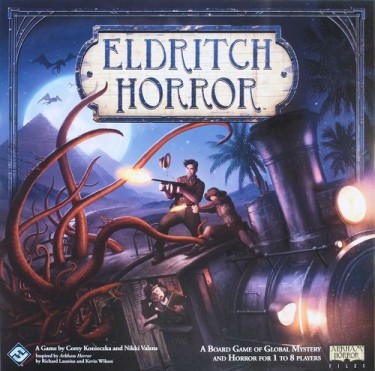 All through the world terryfying occurences are reported! Some strange, never seen other worldly creatures have been sighted and reality itself seems to fall apart. Mankind seems to be facing its doom. But a few people have a little more knowledge, they´ve studied the strange legends and at least were aware of some hidden horror. Now they stand up, trying to solve the mysteries that might give them insight how to end this nightmare.

After the amazing success of Arkham Horror, FFG has now placed this game on a much bigger scale: the whole world is now the stage. Again settled in the universe of Lovecraft, a group of investigators is trying to prevent the great old one from awakening. It´s a cooperative game, where players travel the world, trying to solve three “mysteries”. These mysteries are some kind of challenge. Each Great Old One comes with its own mysteries…Investigators only have limited time to do all this. There are constantly gates opening, that lead to other worlds and unleash monsters into our reality. Depending on the number of open gates, the Doom track will advance, wich indicates how much time is left, before players face the ultimate horror and probably lose. So apart from solving the mysteries around the Old One, players should also try to close the gates wich is no easy task.

The storytelling aspect is even bigger than in Arkham Horror. The cards still require you to do skill tests. But some, like gate cards or cards to gain clue tokens, are more difficult to accomplish: if you were successful in the first test, the story goes on and you find youself confronted with another task. Not until you´ve successfully resolved that second test, you managed to solve this challenge. If you failed the first test, the story takes another way and you also have to prove your skills a second time. If you fail again, you´ll end up in quite some trouble. So, on many cards now, you´ll find small adventures with overall four possible outcomes.

The game feels a little more static than AH though: fights go often over more rounds, it takes longer to get from one edge of the board to the other and the monsters don´t move. The luck factor seems much higher,  wich made FFG decide to add new mechanics for mitigation into upcoming expansions. Definitely something they should have considered in the design from the beginning. Also, after quite some plays, it seems to me that you often know in the middle of the game if you´re gonna win or lose, but gameplay continues for another 2 to 3 hours.

The quality of the components is again amazing. The board looks beautiful, the art of the cards is fantastic…

Although not as good as Arkham Horror, this is mostly an enjoyable game, wich lives from the atmoshpere and the great storytelling. Still, I´ve seen a lot of frustrating moments and seriously suggest to remove the tentacle cards from the game (wich is an optional rule to make it easier). I´ve done a playthrough here. 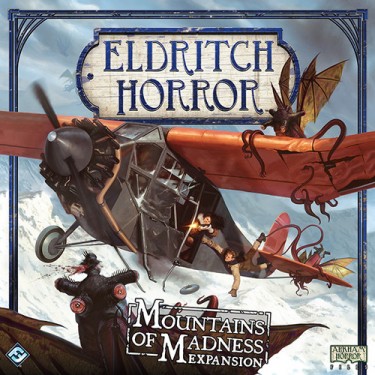 Once again, the Arkham University was able too fund another of her famous expeditions. This time, the destination are the frozen wastes of Antarctica. What seemed first as a scientific adventure turns pretty soon into a dangerous journey of horror, fear and death.  Some remote spaces on earth should better remain unexplored by men, because they might awake the ancient, terrible forces that will bring destruction all over the world…

This expansion is inspired by the novel “At the Mountains of Madness”, written also by H.P. Lovecraft. It comes with an extra board, showing Antarctica, two new ancient ones, eight new investigators and tons of cards, some to use only with the expansion, some to be shuffled into the base game. I wanna point out that the new board is only used when playing against a specific Old One.

There are now “Prelude” cards, that change the setup a little and therefore add even more variety.  The most important new feature is the “focus” action, wich gives you a “focus” token. You may spend those to reroll a die.

A really great expansion!  You might see a playthrough here. 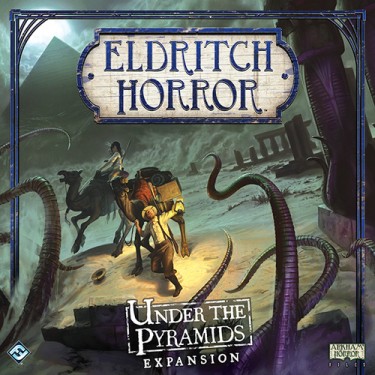 Another expedition (some people never learn) and again the world is threatend by horror and destruction.

This expansion also comes with a new board…Egypt: The Bent Pyramid, the Nile, Cairo…

In addition we see tons of cards, new investigators, two new old ones and a new mechanic wich can force you to decrease your abilities. 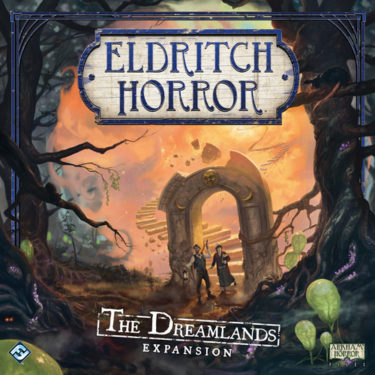 Another big box. Not played yet, but looking forward to give it a try. 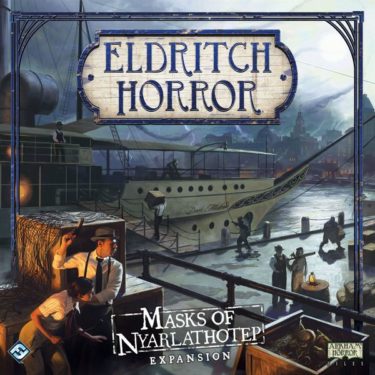 This Box does not come with an extra map, but adds a lot of cards and a few new features: Personal stories for the cahracters, rules for campaign play and the new action “Gain Resources”  that makes life easier. 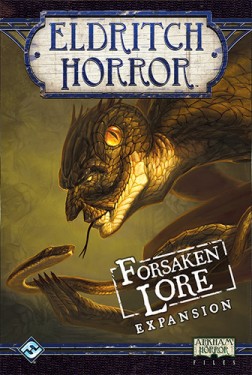 This small box expansion focusses on the Great Old One Yig. He controls the serpent people and is an extremely challenging enemy. Apart from the cards that are specifically used when he´s the Old One, the box adds more cards to all other decks too (locations, spells, conditions, items….). I do a playthrough here. 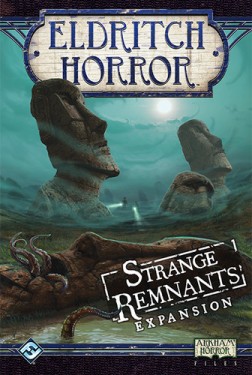 Another small box expansion. Four more characters, more encounters, spells, items and so on. New are the Mystic places: They work similiar to the expedition…a marker indicates where a mystic place can be encountered. These encounters are tough, but provide you with a big benefit if you´re successful. They are only used with the new Old One or one of the new Prelude cards. Here´s the playthrough. 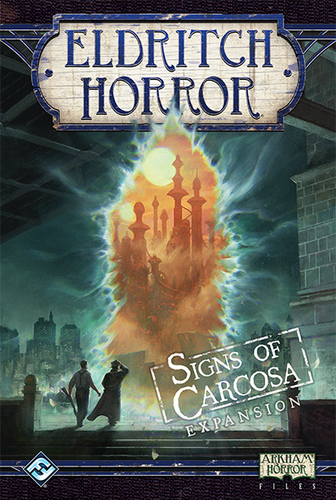 Small box with not too many surprises. 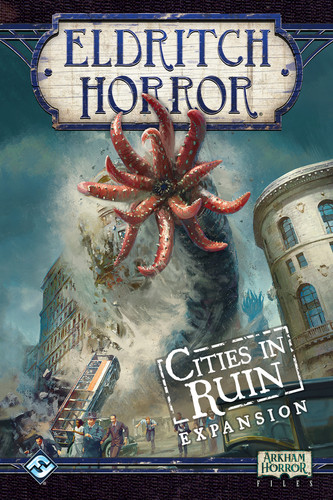 A pretty tough expansion. It adds the devastion mechanic. We see now massive desasters happening on the map, wich may lead to the destruction of whole cities. And the investigators better are far away if this happens. It might be a fun elemet  to play a game with this from time to time. Overall it adds even more luck and this playthrough shows the consequences of this.