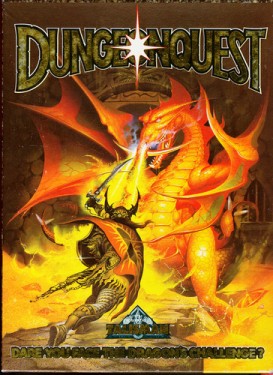 This fantastic game is probably the first successful dungeoncrawl. For me it´s also one of my first Ameritrash games that I played as a child, so it always brings back a lot of memories.

The game is pretty easy: Players explore the dungeon by moving on an empty space and placing a random roomtile there. Now you can only hope, that this will lead you in the right direction and that it´s no dead end. In most rooms you´ll have to draw event cards: there might be traps, cave ins, giant spider nets, monsters, but also tombs or corpses that you can loot. If you´re stuck in a room, you still can search it and hope to find a secret door, that will let you escape. The goal is to get to the middle of the board to the dragon´s lair, where all kinds of precious things lie hidden. But the longer you stay there to satisfy your greed, the greater is the chance that the dragon will awake! If you make it out of the castle alive and have the most gold, you win….but beware: you only have limited time. If you don´t escape before nightfall, there´s no way to withstand the horrors of the dungeon!

The game is simple but so much fun and is has an enourmous narrative element. It has a great replayability also in solo play, because it´s really challenging to simply survive…having the most money at the end of the game is rarely an issue, because not often more than one player survives anyway. You might think, especially in multiplayer, this could be really frustrating, but because the game is pretty short and it´s a lot of fun watching the others die too, this is not the case….

The art is great! Games Workshop 80´s style: hilarious looking monsters and a lot of atmosphere. The map tiles look also fantastic, most of them with an individual, elaborated artwork. The only issue with this edition are the cards: nearly paperthin and pretty small, you´d better sleeve them, because you´ll shuffle them quite often.

I still love this game after so many years and it´s definitely one of my favorites!!

A short playthrough is here. 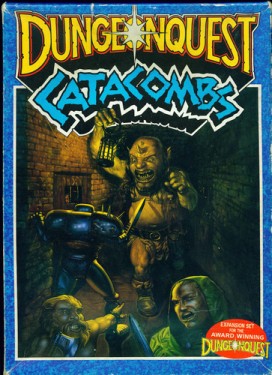 This expansion introduces another level beneath the dungeon, that you can enter, if you find an entrance. It´s not represented by map tiles, but you simply remove your mini and then draw an event card every turn as long as you are down there. Most of the cards say “empty”. If you leave the catacombs, you simply count the number of cards you´ve drawn to see how many spaces you´ve moved from where you started and then place your mini back on the board. The advantage of being down there is that you avoid all the nasty traps, corners, pits and dead ends that await you on the room tiles. There are also not too many events down there, although the ones that you´ll encounter are maybe a little harder. The basic problem down there is to find an exit! I´ve seen people straying down for far too long only to come back to the surface on the other side of the castle….usually I only enter the catacombs if I find an entrance at the beginning of the game, as long as I´m far away from the dragon´s chamber. Otherwise it doesn´t seem that wise to me. It´s not really a must have expansion in my opinion, but it adds a nice variety to the game. 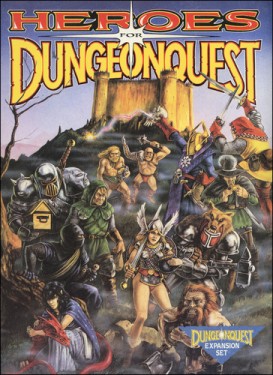 This expansion adds nine new hero classes. They come with great metal minis including four new minis for the heroes of the base game.

Many of the new classes are really interesting like the Ninja, the Chaos Warrior, the Wizard, the Berserker…..they all have cool and really unique abilities and they all play quite differently. This box adds a lot of replayability to the game. Sadly I´ve lost most of the minis through the years, but luckily I still do have all the character cards and other components, so I´m still able to play this by simply using other minis…. 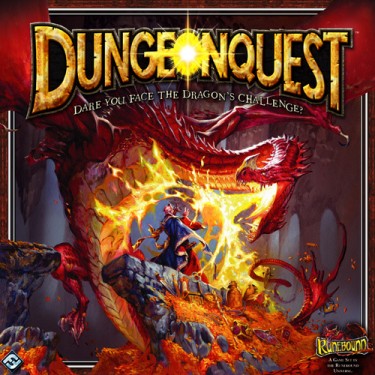 Dungeonquest 3rd edition (I´ve never heard of a 2nd btw) is nearly the same as the 1st. The art of course is completely new and modern and looks awsome, although it lacks the humour of the old one. The catacombs are included in the base game, but we only see six heroes. By the way, it is possible to play with these heroes Runebound or Runewars…FFG added the appropriate character sheets. The combat system was an issue: they tried to make it more interesting and complex, but it wasn´t well received. Most people seemed to prefer the old Paper, Scissors, Stone system. Especially solo it didn´t work well. They came up with official alternatives and these are also implemented in the new Revised Edition from what I understand. Another significant change was the use of 2D6 instead of a D10 / D12…it changes the odds significantly! You also can use “Fate” tokens to reroll a die, so it´s easier to escape total desaster…