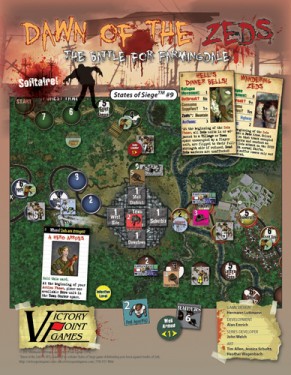 The town of Farmingdale is under attack! Not from the Russians, nor the Martians…it’s from zombies!!

Luckily there are some very brave inhabitants not willing to give up but to defend their home. Mr. Johnson was always hoarding food and ammo, cause he knew this day would come…so he’s locked n loaded. But also others like Sheriff Hunt or  Mayor Hernandez will fight to the end. Of course there will be victims, but the hospital is ready for all sorts of injuries, and of course we all trust in the capability of our scientists to find the antidote…

Dawn of the Zeds is part of the successful Stage of Siege series by Victory point games, so you might call this a wargame despite of the theme. It’ a pure solo game.

It uses a card driven mechanic. Each turn you resolve a card. If you make it through the deck before the zombies reach the town center, you win.

Each card shows an event, how many action points you have, if you consume supplies, if there’s an outbreak and from where the hoards approach.

Four streets lead to the city, with various locations along the way that you might wanna defend. I mean, mostly it’s not the best idea to leave the nuclear power plant next door unprotected…

You might build barricades in those locations and search for supplies and ammo wich is always short. Your heroes have all special abilities wich you definitely will need. But also non-hero units, civilians, are an important factor, though they are not that efficient.

For a zombie game, Dawn of the Zeds is pretty deep. You’ll never have enough actions to do all you want to, so you’ll have to set priorities. You might build barricades, search for ammo, heal people, try to find the antidote or simply move and fight. In every turn, you’ll be confronted with important decisions. Fighting is interesting: Ranged combat might be pretty effective, but costs ammo that is extremly limited. Close combat will mostly lead to victims and infections, even if you win.

The game is full of theme: It seems like everything you’ve ever seen in a zombie film is packed in this game: Refugees, raiders, shootings to save supplies, airstrikes, nuklear meltdown…it’s unbelievable…

Components are terrible: paper board, and really flumsy double sided markers. So sometimes you’ll have to check the backsides of markers that are already in play, because you need it for another purpose.

The art is fine, but not great. All these problems are fixed though in the second edition. I do a playthrough here. 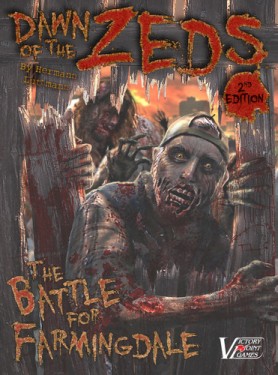 In the second edition, not many changes were done concerning the rules. You have some additional heroes and a few more cards. The map (now mounted) is doublesided and shows a completely new art. It looks kind of modern, but I find it not as clear as the first edition’s map. One side now comes with a new variant…a tunnel that leads to the town in addition to the four other ways. Extra rules for that make the game a little more complicated.

The other side of the board comes with the standard four way map in this “modern” design.

The art of the cards improved a little, the quality of the chits is top notch! I’d say, if you enjoy the first edition, the much better component quality justfies this purchase. 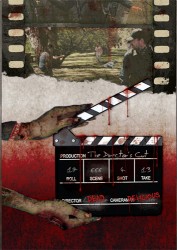 I haven’t played this expansion yet. It comes with new heroes and about 50 cards.