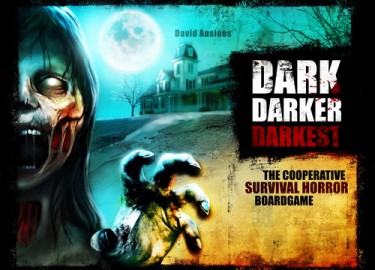 In Dark, Darker, Darkest, players try to stop the mad scientist Dr. Mortimer. He unleashed a zombie apocalypse, and players try to enter his house, break the code for the secret lab to get the antidote and escape. You sneak through the house avoiding cameras that will trigger bad effects if they see you. It’s safer for the group to stay together, but it will take longer to find all the elements of the code that are scattered all through the mansion. The players will not only have to fight back hordes of zombies, but also dangerous creatures like a giant snake or a gorilla that also defend the lab. The fact that there is only limited ammo makes this no easy task, so players try to find additional weaponry and ammo. During the game, fires will break out and spread. If the survivors don’t manage to extinguish them, the whole house might eventually burn down and players will lose. In the end, if they make it to the lab, there’ll be a tough showdown against one member of the Mortimer family. There is a time limit for the players to acclompish all this wich makes this game really tough.

All this different dangers make it vital that players make use of their special abilities and coordinate their efforts. An intersting feature is that, if players build a group in the same room, they may spend their actions in any order they want. For example player A two actions, player C one action, player B three and player A again. I also like the combat system wich is pretty thematic. You can push zombies away, you might get infected or trapped or run away in panic.

The rules are a mess…they had to do a revised edition because they were bad, confusing and full of mistakes. But they managed to correct this and ended up with a very good game. The revised rules are here.

Components are an issue. The box art is wonderful! Map tiles and cards are fantastic. Minis are pretty small and not so detailed…similiar to Zombies!!!. What really bothers me is that some survivor and villain sheets have misprints on them. That sucks! If this happens on a card or in the rules, fine, but not on the sheets. There are even completely wrong values on the guard sheet!!

In addition, they didn’t manage to release all stretch goals that were promised during the kickstarter campaign. And I don’t care about their refund offer. I want the additional creatures!!!

Still, it’s a very good game, although a little heavier.Here’s my playthrough. 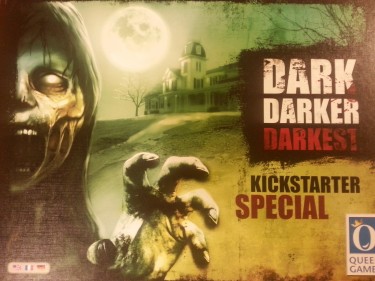 The Kickstarter special added some extras: two new survivors, three new creatures, some new maptiles, zombies with special abilities and new models (these where also released with the Zombie Expansion), radioactive rules with red models (as in the Radioactive Expansion), a small survivor expansion (where you find other civilians in the house) and the small Helipad expansion (a new maptile that shows the landing pad, where you have to end up if you wanna escape).