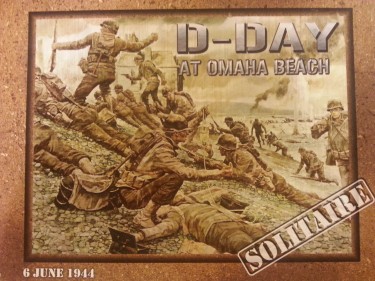 This is a modern classic of solitaire wargaming (although there is a two player option). It covers the famous landing operation of the U.S. troops in Normandy in WW II. from the first waves to the fighting for some important strategic locations in the hinterland.

The player controls the U.S. forces. The game takes place on a big hex map that looks a little confusing first, because of all kinds of colours and symbols. The game is on a squad scale. A track indicates the time of day and when the different units arrive at their sceduled hour. The player has limited actions to activate his units. Heroes and leaders make these action more efficient.

The A.I. is card driven. Symbols and colours indicate wich areas of the maps are currently under fire. The A.I. doesn’t react to the players actions, but it feels still realistic in simulating the chaotic shooting on the beach. I haven’t played the more advanced stage of the game in the hinterland, so I can’t say too much about this.

It seems like a really good wargame, but I have to give it a few more shots before I can really give a fair judgement.