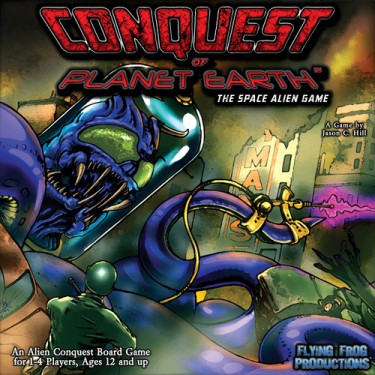 Conquest of Planet Earth can be played competitive or cooperative. Therefore it’s a perfect solo game. Players control one of about eight alien species, each one with its own abilities. In an odd competition, they try to impress the “Overseer” by conquering the earth in the most terrific way. This is measured in Terror points. In the coop game (haven’t played competitive yet), players try to gain a specific number of points before the humans have developed their super cannon, wich would enable them to destroy the mothership in orbit. There’s a track that advances every turn that shows the stage of the human’s achievements.

Players mainly gain points for conquering different locations. They first explore the board buy drawing cards from a location deck. These locations have each specific defense values and they give also a different number of victory points.

There are all kinds of defenders including tanks, planes, police but also individuals like scientists or war veterans that pose a serious danger to the liberators (us). But we can also find powerful allies and we should make sure to get cool Space Stuff as soon as possible (it’s really called “Space Stuff”).

This game provides me with everything I love about Flying Frog games. Tons of glossy cards, cool minis, great art. In this case, it’s not the typical photographic style, it’s more cartoony but really fun! Overall a fast, thematic and intense game. Love it! 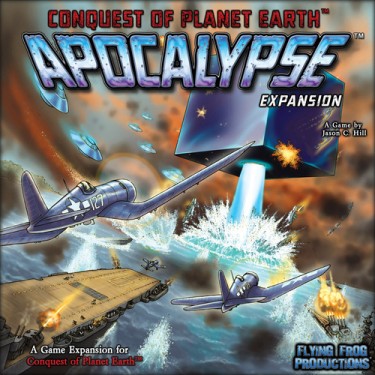 This expansion adds a lot of everything: Aliens, cards of all types, allies.

The real new element are now sea locations and sea resistance. You might now have to fight powerful warships that you have to beat twice in combat in order to defeat them. Playthrough is here.