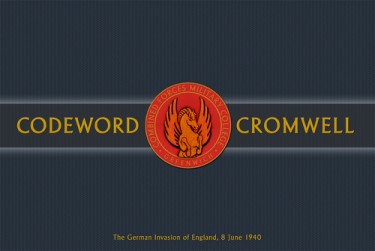 This game is settled during World War II. Hitler initiated Operation Sealion – the invasion of England – and the player controls the inhabitants of an English village, trying to fight back the Germans. It’s a pure solitaire game. The system feels similiar to the successful State of Siege games. An ever growing number of enemies is fighting its way through the village to the center of the map…the church. If they reach it, or if you survive for 16 turns, the game ends and depending on how long you survived and on some other conditions,  you’ll get a certain amount of points.

You control specific townsfolk characters (doctor, policeman), groups of villagers (like the cricket team) or members of the home guard. Later in the game, if you’re lucky a few British or U.S. soldiers might arrive.

Then you do an invasion roll,  modified by the strategy cards. If it is successful, more german troops will arrive.

Next you draw a character event, wich can affect the defenders in a positive or negative way.

Now you can move your people and improve your position.

In the following phase of the turn, new german forces randomly arrive and might also move ahead.

The following combat is very simple: each unit has a combat value that indicates how many dice to role.   Each six is a hit (sometimes also a 5). Germans are killed by one hit, British after two. Melee combat and anti tank combat is a little different, but also very simple.

But where the game really shines is the storytelling aspect. I´ve never seen a wargame with that much story. It comes with a book of about 60 pages, full of an alternative history line, where the Germans have won the war after successfully invading England. Each character has a background and a special ability. They have relationships with eachother that will affect the course of the game. There´s a traitor among them, a german spy, who sabotages the weapons, so you definitely wanna find out who that is.  Every character that get´s killed is a small tragedy, because you become quite affectionated to these brave heroes!

The art is beautiful, the board is huge and looks great.