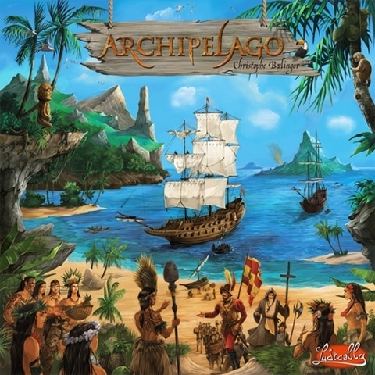 Archipelago is a semi cooperative game for 2-5 players. It´s settled in a tropical environment in the age of discovery. The players explore the islands and the coastal landscape of a new discovered continent by placing tiles, so the map looks different every game. They will colonize the land, hire workers, build harbours, markets, cities and churches….

The interesting part is, that all players govern the same colony. They have to work together to keep people happy. People don´t like to be unemployed for example and they need recources like food or wood. You´ll get these resources by worker placement or trade (wich is why you need markets). The king from the old continent also has demands from his colony that you have to fulfill.   Every turn, cards will come into play wich can be purchased: This way, you can hire specialists (like a pirat or a scout) or you can gain technological advantages (like commercial fishing, theatres or canalization). If there are ever too many unhappy inhabitants, there´ll be a rebllion and players loose.

To make things more interesting, every player has a secret agenda: They might need the most resources of a certain kind, or be the most successful explorers, maybe build the most harbours and things like that. You´ll gain victory points for fulfilling these agendas, so there´ll be an overall winner at the end of the game. There might be even a seperatist who wins if there is ever a rebellion…so you might have a traitor.

I think this is a very good game! The art is fantastic…one of the most beautiful games in my collection. Component quality is great. The theme is captured very well…not all euro games can offer you that: Here, it´s not some mechanics loosely held together by the theme…you really get the feeling of exploring and governing a colony!

Some people seem to had problems with this semi cooperative idea: If players see that they cannot be the overall winner, they might provoke a rebellion to make everybody loose. Well, I can only say, maybe that´s exactly the game you should play if a new player wants to join your group, and you have doubts about his attitude…..

This is the solo expansion. It contains over 20 solo scenarios that are similiar to the secret agendas in the multiplayer game. There´ll be similiar goals (like building cities…), but there are also different levels of success (i.e. building 8 cities in 4, 6 or 8 rounds) Depending on what level you achieve, you will receive a bronze, silver or gold medal. Normally the only way to lose is due to a rebellion.

Loosing is pretty hard, because if you play carefully and take your time, a rebellion barely happens. But it´s extremely hard to achieve a better result than a bronze medal in most scenarios….seems impossible nearly…

This is a great expansion: the game plays very well solo and it´s a real challenge!

You can see me doing a scenario here.