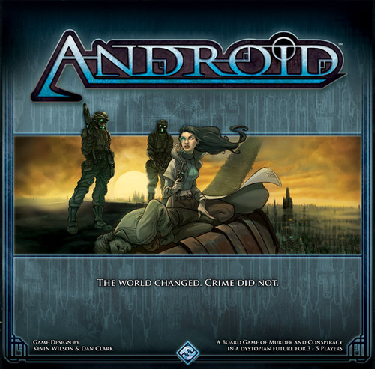 The story of Android takes place in a future setting wich reminds a lot of Bladerunner. The goal is pretty standard: Achieving the most victory points. The game though is far from standard…it comes with some great ideas that make this game a pretty unique experience.

But before I talk about gameplay, I have to talk about the board: It looks fantastic!! One of the most beautiful game boards that I´ve ever seen!! You see kind of a skyline of the metropolis of New Angeles by night in the lower half of the board. Reminds a little on the dark shots of Gotham City . The upper half shows a segment of the moon, wich is also colonized by men. Both are connected by the so called “Beanstalk”, some space elevator.

So that´s where the story takes place: and it really is a story!

There are three plot lines in the game: First of all, players have a murder case to solve. Second, there´s a conspiracy in the political and industrial society of New Angeles, that you also wanna reveal. And last but not least, you have a private life and all these crime research detracts you from your personal problems, like saving your marriage or other little things like this…

The expression “solving the murder case” might be a little misleading: At the beginning of the game, the murder is not determined in any way. You draw three cards: one that tells you how many points you get if a specific suspect is the murder, and two others show you suspects that must be innocent if you wanna get some points. These cards are kept secret. So what you do as an important part of the game is moving through the city  (and the moon), trying to find evidence. If you collect evidence, you take a random marker out of a cup, wich either says guilty or innocent and it also has a number that indicates if it is strong or weak evidence. Then you place these markers facedown on a sheet with the suspects. In this way, players determine who´s guilty and who´s innocent, wich is revealed at the end of the game. So collecting evidence is an important part of the game.

Another important aspect is the conspiracy….in the end of the game, there might be additional options to gain victory points, or some victory points might be modified, depending on who is involved in the conspiracy. The players will again build this conspiracy plot themselves during the game. It´s a fantastic idea: there´s a fixed puzzle piece on one corner of the board. Close by there are pictures of New Angeles´important institutions like the Church, the Mayor, some big companies and so on. Now players can gain random puzzle pieces on several occasions wich show lines, crossings, corners… They can place these pieces so that they connect in a way to the institutions that will maximize their victory points at the end of the game.

Finally there are pivate problems that you have to take care of: Helping a friend, saving your marriage, all kind of things. At the end of the game, this will also give you victory points…or cost you some if you failed. Mostly it comes down to sacrificing something that might be helpful for the other plots. But it´s not as simple as “discard x and solve your mission”…these are real stories and sometimes you might not even win or loose but just manage to keep things balanced.

In addition to standard event cards, every character has it´s own decks of cards: One deck with positive effects, one with negative effects. As an action, you might draw from the deck with the positive effect, but you might also draw from other player´s negative cards, wich you might play under certain limitations. These character specific cards also add a lot to the feeling that every character is unique, with its own demands and backgrounds. Of all of my games, this is definitely the one where characters feel the most as real individuals with a real personal story that makes them special!

Android is a great game, that looks really fantastic, it´s highly thematic and takes a lot of chances with all these new ideas. Sadly these new approaches might be a little overwhelming wich could be the reason why this game was no big commercial success, although the ratings are high. Also, many people complained that it´s no logical approach, that players “construct” the murder during the game. That you try to “make” someone a murder, because that´ll give you victory points. I think if you take the cards at the beginning as a hunch, and you try to find more evidence to prove that you´re right, then it makes definitely sense.

The game is designed for 3-5 players. There´s a very successful solo variant on BGG though, wich I haven´t tried yet. Hope to find the time soon…