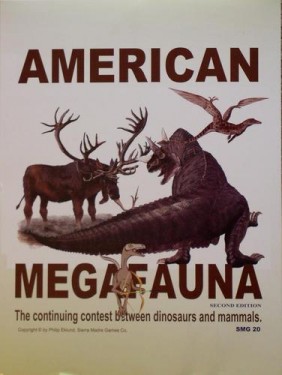 American Megafauna is a game about the evolution of species from the Triassic to the Quaternary (today). It´s settled on the land mass later known as the North American continent. Basically it´s designed for 2-4 players. For victory you need the highest population.

The map is semi randomly constructed by different biomes, like Rainforest, Maple Hackberry Woodland, Clam and Oyster Beds. These  bioms can only sustain a limited number of creatures. For many of them, your creatures need certain reqirements, especially if they are herbivores. A herbivore in the woodlands for example would need the browse and the graze abilities to survive. For carnivores it can be simpler, because they can simply eat the herbivores. On the other hand, they also have to adept to defensive mechanisms of their prey. If the population on a biome becomes higher than the maximum population that a biome can sustain, the most adepted herbivores will survive. Now, if this means that the prey of a carnivore is eliminated in its biome, that carnivore will die too, if it finds no other suitable prey.

Every turn, a card will be revealed. Many of them are DNA, wich allow you to gain new abilities. You might get Wings, wich allow you to fly across the map, Digitigrate Sprinting wich makes the life for your prey/hunters harder or a Sculling Tail, wich allows you to swim. Tripod Stance makes browsing much easier….These DNA are gained by a bidding mechanism.

Also, don´t curl up too much: Your biome might change over the next millions of years. Where once was woodland, there might be the sea…better adept or find another place…

The currency of the game are genes. You get these if catastrophies strike the earth…they will bring extiction for some species (especially the more developed ones) but also the chance for new evolutionary paths.

There are climate changes which might lead to flooding of biomes or icy conditions. The ladder will then lead to a lower sea level wich would allow immigrants to enter the continent. They could pose a serious threat in the competition for living environments.

Even plate tectonics will influence the game and change the map…

The components are terrible though: No mounted board, not even chits, just some thick paper tents. Damn, you even have to fold the box by yourself!

Still, for me this game is great! It captures the theme in a fantastic way, and like so many Phil Eklund games, it is rooted in hard science.

There´s also a solitaire variant, wich is fun and fast, but it lacks the real competition for the biomes. There are just a few of them instead, and your goal is simply to survive by adaptation to the permanent changes of the environment. You can see me play this variant here. 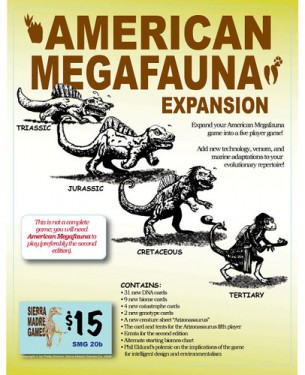 This exapansion simply allows a 5 player game and adds even more cards.