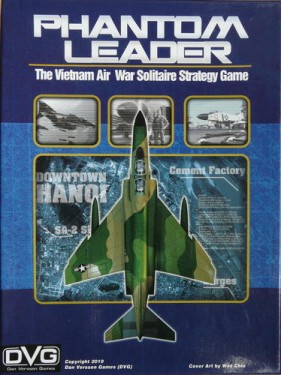 Phantom Leader is a game of a whole series that follows a similiar system: The Air Leader series.

It´s a solitaire game settled in the Vietnam war. You are in command of a squadron of different aircraft types flewn by different pilots, each with specific strenghts and weaknesses. You play one of three campaigns (War in the south/ Rolling Thunder/ Linebacker) either with the Airforce or the Navy. Every campaign offers a short, medium or long variant, wich means that you fly about four, eight or ten missions. In the end, your scored number of victory points tells you, how successful you where.

For each mission, you choose one out of a few random targets, represented by a card, containing key information, like its location, number and placement of randomly drawn defensive sites, number of possible bandits and damage you have to inflict to destroy it. There´s also a maximum number of aircraft that can fly the attack depending on the target.

Now each mission contains of three phases: At the beginning you decide who´s gonna fly and you arm your aircraft. That´s what probably takes the most time in the game. There´s a carrying limit, so you really have to plan ahead wich bombs or missiles are the most efficient against specific targets. You need to find the right balance between Air to Ground and Air to Air weapons. Problem here: While you know exactly what´s on the ground, because that´s placed before the mission, you only get an idea of the number of enemy fighters, because they are later drawn randomly. In addition, there might be bad surprises from event cards.  You may also use advanced weapons, wich are much more powerful, but you have to pay Operation points for them, wich you are very short of.

The mission itself is fast and simple:

You have four turns to approach the target and destroy it! During the approach, you´ll have to deal with the sites and the bandits on a highly abstract board. While you probably wanna try to destroy most of these, there are always situations, where you have to use precious ammo to suppress enemy fire, or you take a higher risk and try to evade (not good for the stress factor of the pilot btw.). Over the target, you hopefully have enough firepower left to destroy it.

If an aircraft gets damaged, it can no longer attack, so mostly that´s the end of your plan and probably also of the mission. If an aircraft is shot down, you´re in trouble. Even if a search and rescue mission should be successful, the pilot is probably a nervous wreck and you´ll lose victory points.

After the mission , you´ll do the bookkeeping. You´ll gain victory points (or not), the pilots gain experience and might even be promoted, wich improves their abilities. They´ll also accumulate stress points. If there are to many, they´ll need a break, otherwise, they will suffer a penalty or might even not be allowed to fly anymore at all. So you´ll have to keep an eye on your pilots mental condition during the campaign.

Overall a very good war game! Maybe it becomes too repetitive, if you play the long campaigns, simply because most missions play similiar. So usually I play the medium campaigns, wich still let me enjoy some pilot developent. You will miss that if you play less than, I would say, seven missions during the campaign.

Although the rules are really simple, the game has a high learning curve: It will take a while, until you know wich weapons to use against what kind of target…they also have a different range, can be only fired from low or high altitude and so on. So during the first missions, the armament takes really long and that might be a little frustrating. Once you know these things, it goes much faster…

There are also ways to adjust the difficulty and some other optional rules.

There also exists a deluxe edition, wich offers basically more aircraft and campaigns. Components are a little better (including a mounted board).

You can see my video series here. 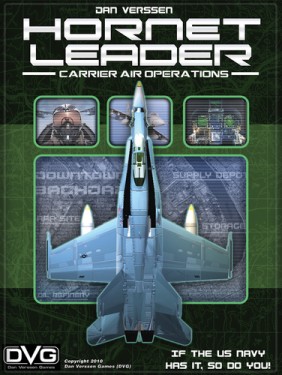 It covers real and fictional conflicts between 1986 an 2015. Most are settled in the middle or far east. The game comes with eight campaigns. Three official additional campaigns can be downloaded for free here.

It also offers some additional features like night missions or secondary missions. It introduces targets that stay in the game even if you don´t choose to attack them. They give you a penalty until they are destroyed (i.e. an airfield might add additional bandits to other missions until you destroy it).

The two most important differences is the increased mission length and the smart missiles. There´s now an additional target approach zone, and you now have up to five turns to destroy the target.

The smart missiles give you the option to attack more bandits at the same time, wich is extremely powerful.

I´m not sure, but I think these smart weapons might make the game a little too easy in the standard difficulty. On the other hand, there are also different options to increase difficulty.

You can see my video series here. 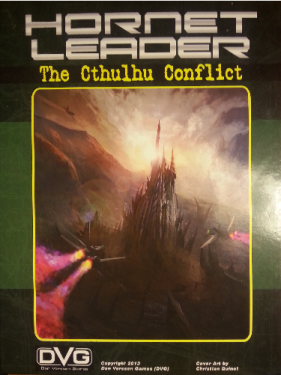 The Cthulhu Conflict is an expansion for Hornet Leader. When I first heard about it, I was laughing out loud. Simply couldn´t belive it. But I really loved the idea: A really good war gaming system combined with the Cthulhu myth. The art looked fantastic, so a clear winner!

Oh, boy….how was I wrong. What a disappointment!

I still don´t get it…the idea of this gaming system is to plan ahead, carefully arm your aircraft and then launch a precise airstrike. But then they had this brilliant idea of some “twisted space” or whatever it was called. At the beginning of the mission, you place your aircraft randomly on the board! Whaaaaat? What BS is this? Makes the whole planing process obsolete. Your aircraft with anti aircraft  weapons might start right over the target, far away from aerial threats, while the ones with the heavy bombing load might pop up right next to some flying monsters as easy prey. Some argue, you have to arm your aircraft more balanced….but what´s the point then? The interesting aspect in this game for me was that every aircraft had a specific job to do during the mission. So for me, this expansion doesn´t work at all! 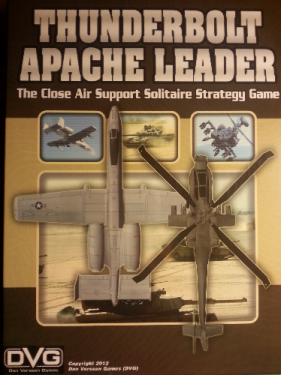 Thunderbolt Apache Leader plays very different compared to the other games of the series. An important difference is the terrain, introduced here for the first time. The game comes with 18 terrain tiles. In each campaign, you will only use ten of them, randomly placed in each mission. In this way, a random map is formed showing a kind of desert landscape divided by ridges.

There is no longer a single fixed target, protected by defense sites and bandits, but you have to attack batallions, containing different types of units spread all over the map. To destroy a batallion, you´ll have to destroy the majority of its units. The terrain plays a major role: You can use the ridges as cover by flying in low altitude, so that Line of Sight is limited. Crossing ridges in low altitude is a pretty risky and stressful maneuvre though…If you fly at high altitude, you can ignore terrain limitations, but you´re also an easy target. In addition, you´ll have to draw a random counter for each aircraft in high altitude, wich might bring more enemies on the map.

Missions take much more turns now…ten or more. If you take damage, it can be very specific….like engine damage or bullet holes and so on. Each damage type gives you specific penalties. You can do repairs between the missions, wich costs you Special Operations points, wich are very limited.

The campaign plays also different: You have to fight a number of batallions, wich will come closer to your base during the campaign. If they reach the base, you´ll suffer a massive loss of victory points, so you have to react to the movement of the enemy, wich gives this campaign a much bigger coherence than the more abstract concepts in Phantom or Hornet Leader.

The focus of the game goes a little bit from planning ahead to improvising during the mission. You still have to arm your aircraft thoughtfully, but, if something goes wrong, it doesn´t mean the end of the mission: You have a higher weight limit, a pretty powerful cannon and more time.

I prefer the planning process of the other games, but that´s just my personal opinion. I still think this is a real good war game!

You can find a video series for this here.