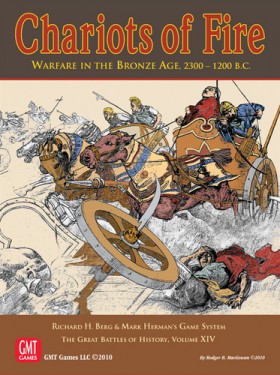 It´s the first game of the Great Battles of History (GBoH) series I played, so I´m not sure how similiar it is to the others. From what I´ve heard, it seems to be more on the light side, although to me, as a beginner in tactical wargames, it seems pretty heavy. It uses a chit pull system (wich seems to be unique in the series) to determine the order in wich the players can activate their wings. This brings quite some randomness into the game, wich makes it easy to play solo.

Basically you have three unit types, wich can be divided again in subcathegories: melee units, missile units and chariots. The latter are also missile units, but much faster and more robust.

The game takes place on different hex maps, but because there is very little information available about many of the battles, five of the nine battles are played on a featureless blank hex grid.

Combat is handled with different combat tables and lots of modifiers. There are many details like reaction fire, weapon type vs. armour type efficiency, limited ammo, facing….This gives the game a high learning curve, and I had to check the rules over and over during my first battles.