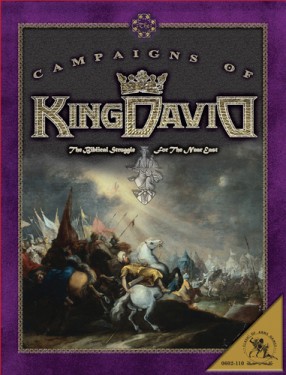 Campaigns of King David is about the struggle of the main powers for supremacy in the near East in biblical times. Judah, Philistia, Tyre, Aramea and Moab are trying to conquer each a specific number of cities to gain an automatic victory.

The game is driven by chits, wich determine the type and order of actions during a single turn. Not all the chits of a turn are revealed at the start of the turn. This adds some randomness and unpredictability to the game. Actions are move and combat, build units, harvest resources and food and draw event chits. Pretty standard options here. There are four types of units.  In battle each unit rolls a die (d6, d8, or d10) and adds its combat strength.  That’s the number of hits it does. Units can take hits according to the type of die it is allowed to roll: so a unit that rolls a d8 during the attack can take 8 hits.

The system works well although it needs some number’s jiggling.

Leaders give you a big advantage: they are allowed to carry additional units above the normal stacking limit of four. They also double the movement of the units.  Because only Judah and Aramea own leaders, they seem to start with an advantage,  wich might be balanced by the higher number of cities they have to conquer.

For its rather low level of complexity, the game handles minor powers in a neat way. You can ally with them, they might be invaded and fight against you or do raids.

Overall this is a solid game. The map and components are beautiful. The rulebook is terrible.  It simply is incomplete.  It consists of 11 pages and the FAQs are 10 pages…what a mess.

The game also feels a little generic. There is not a lot that connects to that specific time like some historical events.