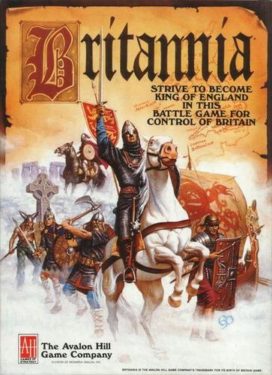 In this old classic of Avalon Hill, players follow the history of Britain from 43 to 1085. It´s the ancestor of a whole family of games: Italia, Hispania, Maharadja. Players control not only one, but four or five nations during play, starting at different times and often disappearing again. Each nation has its specific goals, usually controlling certain areas (that they historically controlled), its own leaders and sometimes even special units. At the end of the game, the points that all the player´s nations scored are added to determine the winner. Combat is simple: for each unit players role a die, a five or six usually hits. After each round of combat, retreats are possible. There´s also a little terrain and leader bonus. At the beginning of your nations turn you get reinforcements for controlling areas.  Every few turns big invasions occur with a new nation arriving and shaking things up. That´s basically it. The game is pretty long, but it´s still playable in a single session…maybe eight hours. It´s enjoyable but decision making is limited: your strategic goals are already given and you just follow the path as good as possible. The game is best for four players but works also fine solo…maybe not good for two or three. I do a playthrough here.